Home / Bitcoin / For original Bitcoin SV – 2019 is all about scaling 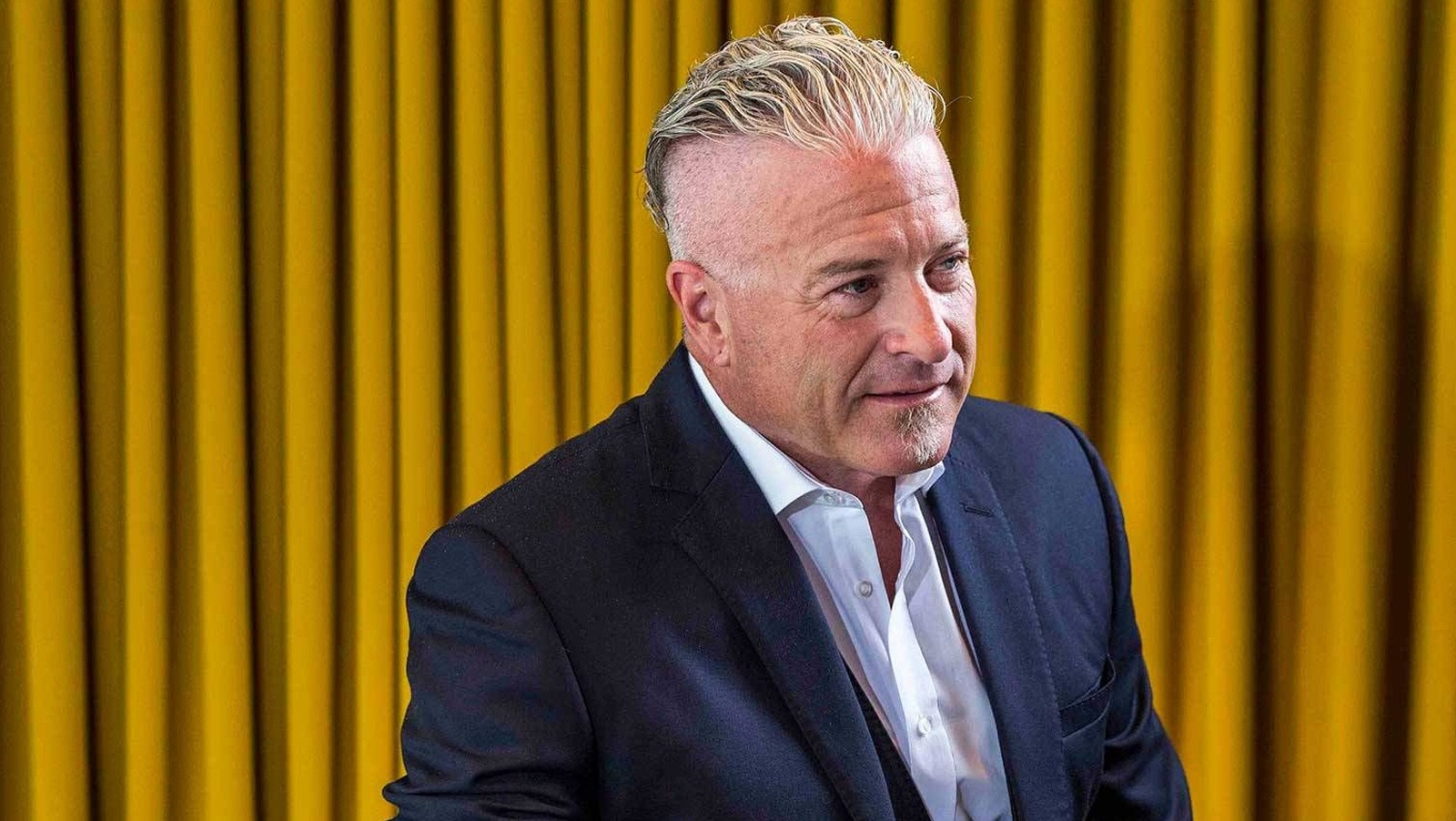 All the anti-scaling forces who were in the Bitcoin world have carved themselves away from Bitcoin and have their own altcoin (inaccurately still using the Bitcoin name unfortunately) which no longer has the original Bitcoin economic model. Now that this has happened, Bitcoin SV is clear to massively scale in 2019, while still keeping the original Bitcoin base protocol stable. Ironically…all the anti-scaling forces are now out limiting their alt coins from massive-scaling and wasting time on unnecessarily complex side chains or second layer solutions.

As painful as this was and as fraudulent as this outcome is now that the Bitcoin name is being used to sell platforms that no longer have Bitcoin’s economic model, it at least allows the market to decide without the artificial restrictions that original Bitcoin has been subjected to for the last few years.

Below is a chart of the largest on-chain blocks on different “Bitcoin” chains mined in the 10 years since Bitcoin was invented. You will note that the top 16 records are all done using the Bitcoin SV (Satoshi Vision) implementation (when it was on the Bitcoin Cash chain) or on the Bitcoin SV chain using the original Bitcoin economic model and vision. The last block record was 65 MB mined by Mempool in China on Christmas eve, December 24 of this year. It is interesting to note that this is only one MB bigger than the last world record block mined during the BCH hash war by my mining operation CoinGeek. This seems like a very small increase until you note that the largest ever Bitcoin Core block is just over 2 MB in total. The fees for these small blocks are embarrassing also…you cannot do micropayments with this platform at all. 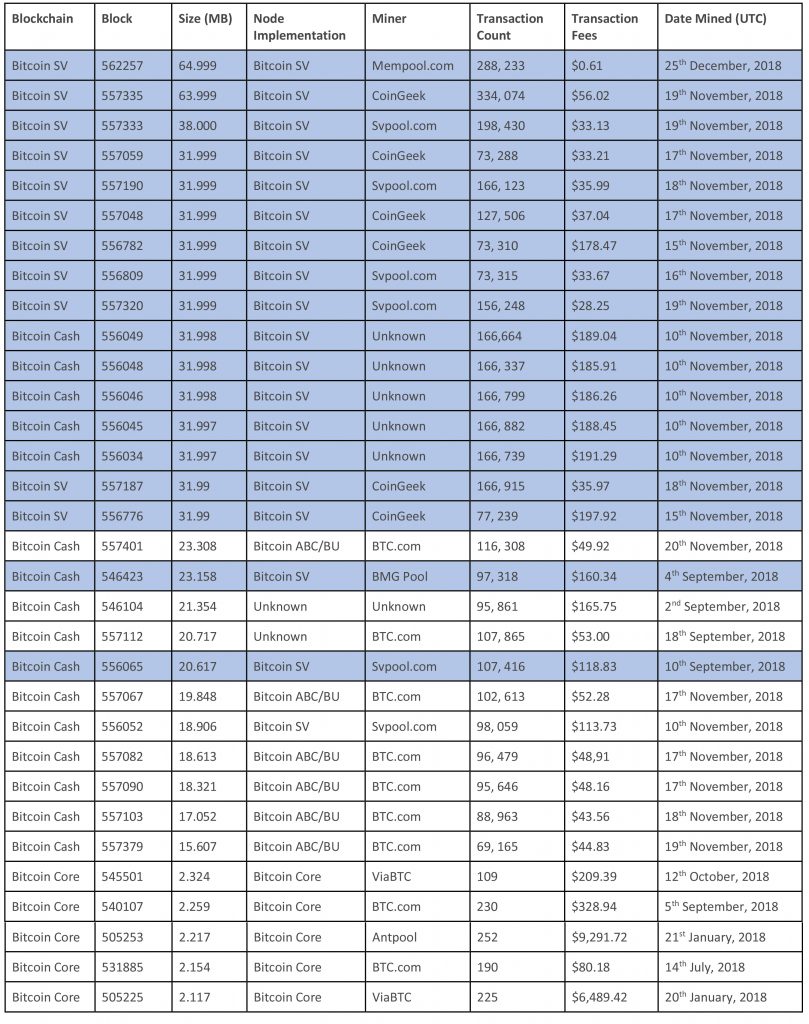 All of the anti-scaling forces have insisted that they need side chains or bastardized changes to Bitcoin’s original protocol because on-chain scaling using Bitcoin’s original plan was somehow dangerous or impossible? We knew all along that this was a bold faced lie and we are happy to put our money where our mouth is and prove it. They all want side chains, pre-consensus, Proof of Stake or any other litany of radical changes as some kind of way to keep more control away from Miners and in the hands of protocol Developers, and to transfer value from coin owners and Miners to themselves. That has always been what they want and this is not what Bitcoin was designed to do. If you change the code that enforces the genius of the original economic model, you are changing the economic model and you are no longer Bitcoin. Bitcoin is first and foremost the genius underlying economic incentive model, not a developer’s experimental code.

We know another Professional Stress Test is being planned soon, and we hope it show that substantially bigger blocks, hopefully up to 128 MB, can be done. I predict this test will also be the last nail in the coffin of any belief in the self-serving and ultimately, ironically self-failing lie of on chain scaling being dangerous.

But this is only the start…now that anti-scaling forces are off tripping themselves on their alt coin chains, there is now only blue sky ahead for Bitcoin scaling and all of this without tweaking the platform so anyone who needs massive scaling and micropayments can code once to BSV and then just focus all of their creativity to their unique business model.

Now market forces can again be the determinant of adoption and not dictatorial protocol developer teams. Miners also need BSV as the next halving of the block reward amount is less than 2 years out, and for mining to be profitable, miners need massive scaling and huge volumes of transaction fee micropayments to create the revenue to sustain Proof Work. We expect all miners to be fully supporting Bitcoin SV and its scaling road map in 2019. Likewise, all hardware developers for mining also have their fate tied to the success of Bitcoin SV and will also be fully supporting Bitcoin SV in 2019.

That is not all. There is one other group that needs Bitcoin SV and its scaling: exchanges. As the other platforms that don’t scale disappear, exchanges will need business models that enable security and utility token exchange. With its incredible scaling and its open source token and smart contract platform called Tokenized, Bitcoin SV is the only platform that works today for massively scaling token creation and exchange.

But it does not stop there. Bitcoin SV also has a clear future vision and it is alone in articulating one publicly as far as I know. nChain’s Dr Craig Wright, has announced Metanet…that way to transform the Internet by powering it through the blockchain and connecting the blockchain to the value of everything. This also, not surprisingly, needs massive scaling. This will power the Internet of things and so much more. It will also allow for the valuation of data itself and hopefully can help sort out the FUD from the Facts.

The place to join to be a part of this exciting time and community is the bComm Association. And the place to be to mix with thought leaders in this space are the CoinGeek conferences – which will happen 3 times a year. The next one is in Toronto, Canada in Spring 2019; after that, we expect to move to Seoul in fall 2019, before returning to London in early 2020 to celebrate the 11 year anniversary of Bitcoin.

I know I am super pumped about what we have coming in 2019 and that is all because of massive on chain scaling. 2019 is all about scaling.

Happy New Year everyone and remember, original Bitcoin is open for everyone so come join us and see the power of massive on-chain scaling for yourself.