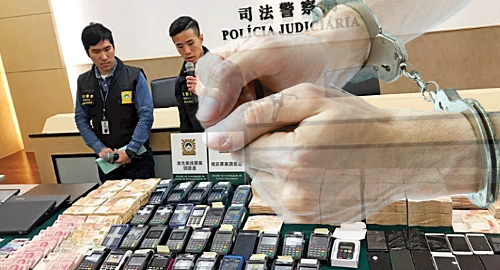 Macau police have rumbled a gang that modified mobile banking terminals to appear as if users were still on the Chinese mainland.

The modified POS machines allowed Macau visitors to use their bank cards to access cash while making it appear as if they’d never left the Chinese mainland. The PJ said the gang had reportedly begun its illegal operations in 2016 and allowed users to illegally withdraw MOP1.4b (US$173.4m) in 2018 alone. The gang’s profits reportedly funded a much larger underground banking network.

The PJ’s investigation began in November 2018 after receiving certain information from their mainland counterparts. The PJ raided eight luxury flats in Macau, seizing a number of the modified POS terminals and around HK$5m in cash.

The PJ froze an additional HK$25m that the gang allegedly deposited on account with a VIP gaming room at an unspecified Macau casino on Cotai.

A PJ spokesperson claimed the gang had focused their efforts on VIP gamblers looking to fund their casino activities. Once the gang hooked up with a VIP, the money he/she required would be withdrawn from the casino accounts then delivered to the VIP’s hotel room.

UnionPay has taken steps to minimize the likelihood of its Macau-based operations being misused, including monitoring transactions in real-time and installing facial recognition technology on its local ATMs. Macau’s pawnshops have a well-deserved reputation for facilitating bogus UnionPay transactions in which a customer purchases a luxury item then immediately sells it back to the shop for cash for gambling purposes.