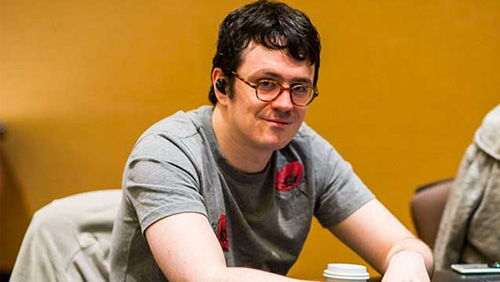 Isaac Haxton is the newest member of the Super High Roller winner’s circle after taking down the fifth iteration of the event, beating the world number one Alex Foxen, heads-up, to claim the $3.67m first prize.

The cops come in and order another round of Diabetes. You don’t see rainbows in LA, and you don’t see guns in the UK. Am I supposed to get a sense of security when I look at these two police officers wearing bat belts containing guns?

It’s like sitting at a poker table with Isaac Haxton.

All I have is pepper spray.

Haxton has more weaponry in his arsenal than all of the LAPD put together.

While you and I were unloading the dishwasher last night, Haxton won his first major title in more than a decade doing battle with the preeminent poker predators in the poker universe.

The partypoker pro won the $300,000 buy-in Super High Roller Bowl V (SHRB) for $3.67m, but more importantly, a place in the annals of poker’s past, present and future.

Haxton came into the final day in a confident manner, holding a quarter of the chips in play and with position on Stephen Chidwick sitting behind the second largest stack in the PokerGO Studios.

Nobody was going to exit from this thing via the emergency staircase. Every one of these players would leave via the front door with their heads held high, after navigating their way through the toughest field of the year.

The first to do so was the 2018 Poker Master, Ali Imsirovic after he saw his pocket jacks cracked by Haxton’s A5cc, after the soon-to-be SHRB Champ flopped a flush draw, before finding the missing limb on the turn.

The two kings of philanthropy tangled in the next elimination when Talal Shaerkchi found pocket tens at the same time Igor Kurganov moved all-in with pocket sevens. Kurganov would collect $756,000 for his sixth-place finish, and that means a few more lives saved somewhere in this world.

Adrian Mateos fell in fifth place when he lost a flip against Alex Foxen 99<AK, and the Spaniard’s eviction saw Foxen taken a 4:1 chip lead over his nearest rival, Haxton, with the two Englishmen taking up the rear, and it was the two Englishmen who exited in fourth and third.

Haxton’s double elimination closed the gap between him and Alex Foxen to 4,965,000 v 5,840,000 as the pair readied themselves for heads-up action. Haxton would go on to claim the headlines, but let’s pause for a moment to acknowledge what a fantastic year Foxen has had.

His recent victory in a $5k event at the World Poker Tour (WPT) Five Diamond World Poker Classic at the Bellagio, coupled with his runner-up finish here means he wins the GPI Player of the Year race and ends 2018 as the best No-Limit Hold’em tournament player in the world.

That’s worth a hat tip.

However, this was never going to be Foxen’s hour.

Haxton won every notable hand including catching a two-card runner-runner combo when all-in KJ v A8 after Foxen had flopped a second ace, to take down only his seventh career title, and the most substantial first prize in his decade-long career.