Home / Business / Is DOJ preparing another Xmas drive-by of the Wire Act? 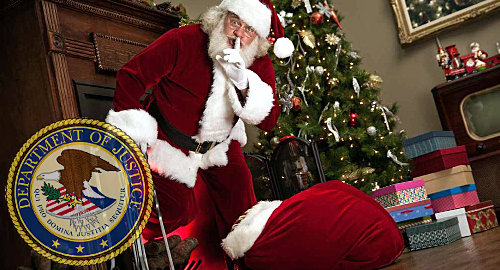 Rumors are swirling that the US Department of Justice (DOJ) is planning another Christmas drive-by attack on federal gambling rules.

Seven years ago this month, the DOJ’s Office of Legal Counsel (OLC) issued an opinion that the 1961 Wire Act – which bans the interstate transmission of data for wagering purposes – applied only to sports betting.

The opinion, which specifically addressed state lotteries’ right to sell lottery products over the internet within their state boundaries, led to a number of states launching some form of online lottery sales. It also paved the way for the three states – Delaware, Nevada and New Jersey – that have since launched their intrastate online gambling markets, and for states like Pennsylvania, which plans to launch its online market in 2019.

On Wednesday, Online Poker Report claimed that the OLC was preparing a new opinion that could effectively reverse the 2011 opinion, which was never popular with (a) social conservatives, or (b) Sheldon Adelson, boss of casino operator Las Vegas Sands and a major GOP sugar daddy, who has made the eradication of online gambling one of his pet causes.

There are numerous unknowns regarding the rumored OLC opinion, not the least of which is whether or not said opinion will actually materialize. Equally unclear are its potential effects on the existing intrastate markets, in particular the interstate poker liquidity-sharing deals between these states.

GamblingCompliance scribe Chris Krafcik noted that the opinion could spook already skittish US financial giants into declining online gambling transactions in intrastate markets. It’s taken years for these states to convince card-issuing banks that the transactions are legit, and the loss of these payment options would not go unnoticed.

US President Donald Trump’s original attorney general Jeff Sessions, who was forced out of office in November, had stated his desire to “revisit” the 2011 opinion but never took any steps – at least, none that have become public to date – to turn this desire into reality. It remains to be seen whether the rumored new opinion was written at Sessions’ direction or that of his acting replacement Matthew Whittaker.