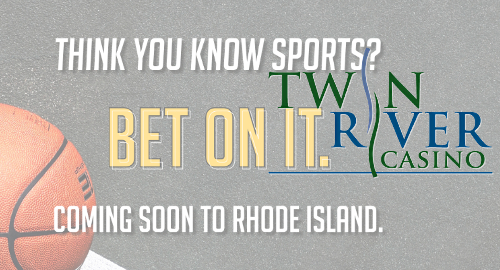 On Wednesday, the operators of Rhode Island’s Twin River Casino announced that legal sports betting would commence at its Lincoln property on Monday, with its new Tiverton casino expected to follow suit in December.

The Associated Press said the casino operator planned to have state Senate President Dominick Ruggerio, who championed sports betting legislation earlier this year, on hand to take part in an “opening bet ceremony” at the Lincoln casino on Monday at 3pm. Ruggerio will be joined by state House Speaker Nicholas Mattiello and Twin River chairman John Taylor, and any winnings generated by these three betting rubes will go to charity.

Rhode Island was supposed to launch its legal wagering market on October 1 but the process was delayed due to longer than expected negotiations with the state’s sportsbook technology partners, International Game Technology and William Hill US. The delay forced legislators to trim $12m from their current budget allocation, but better late than never.

WEST VIRGINIA GETS THIRD BOOK
Penn National was also first to launch wagering in West Virginia at its Hollywood Casino at Charles Town Races in late August and the FanDuel Group launched its sportsbook at the exclusive Greenbrier Resort in mid-September. The state now has its third sportsbook courtesy of the Mountaineer Racetrack & Casino.

The Mountaineers’ betting offering is, like PNG’s, powered by William Hill. The WV Metro News quoted Mountaineer GM Bill Winkelreid said the venue also planned to launch a mobile betting app but it wouldn’t be available this year.

Winkelreid said he wasn’t expecting significant direct revenue from wagering but the “big increase” will come from increased attendance and the expectation that these extra bodies will partake in the property’s other amenities.

The state’s other two casinos, Wheeling Island Casino and Mardi Gras Casino, are run by Delaware North, which has a betting tech deal with Miomni Gaming. In October, Delaware North said it expected to launch its wagering operations this month.