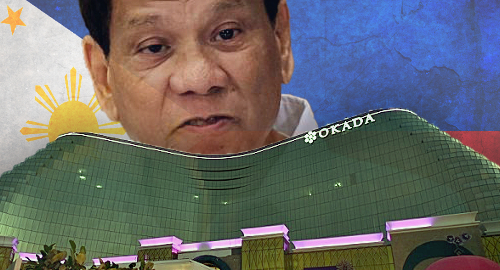 Police also seized a number of computers, mobile phones and other digital devices. The Inquirer reported that a forensic examination of these devices had obtained “volatile data” that will ensure the suspects are convicted of violating the Cybercrime Prevention Act of 2012 and Presidential Decree 1602, which prescribes stiffer penalties on illegal gambling.

DUTERTE WARNS GAMBLING COPS
Meanwhile, Philippine President Rodrigo Duterte has warned the nation’s police officers not to go anywhere near the Okada Manila casino, because it attracts “the lowlife in society” and was “crawling with usurers and kidnappers.”

Speaking Thursday at the launch of a container barge port, Duterte said police were to stay far from the casino in question regardless of whether they were “in uniform or civilian clothes.” Duterte warned officers that he could deploy the elite Scout Rangers to patrol the area and any officer caught near the casino would be summarily dismissed.

One year ago, the PNP announced that it would station some special officers at casinos to ensure other officers weren’t patronizing the casinos. That decision followed the discovery that several officers had participated in the kidnapping and murder of a local casino junket operator.

Rappler quoted Duterte referring to “that motherfucking Okada,” although it was unclear whether he was referring to the property or to Kazuo Okada, the former head of Universal Entertainment, which operates the casino through its local subsidiary Tiger Resorts Leisure & Entertainment.

Okada Manila issued a statement following Duterte’s diatribe, saying it “fully supports President Duterte’s call for vigilance against erring members of the police force.” The casino added that it would “cooperate and coordinate” with local authorities to ensure “the safety and welfare of our guests.”