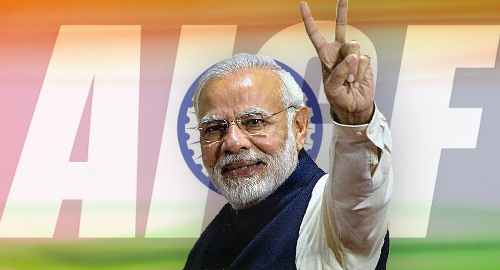 On Friday, Indian gaming news outlet GLaws reported that the AIGF had written Prime Minister Narendra Modi beseeching him to unleash the Enforcement Directorate (ED) against the hordes of internationally licensed gambling operators beaming their signals across India’s digital borders.

The AIGF’s letter to Modi (pictured) singled out nine online gambling websites, including 1xbet, Betfair.com, Bet365.com, BodogIndia.com and Jeetwin.com, who the group accuses of “luring and accepting bets from Indian citizens” who are thus “lured to the addiction and risk of gambling.”

The AIGF claimed that these international rogues were breaking Indian law, which doesn’t permit online gambling on a national level. The state of Sikkim has authorized online gambling, but only via digital terminals in betting shops, in the (apparently misguided) expectation that the physical presence requirement would help drive tourism.

The AIGF claimed that the operators were also in violation of the Foreign Exchange Management Act and the Prevention of Money Laundering Act, in that they unlawfully accepted payments from Indian gamblers through digital wallets and the Islamic-based ‘hawala’ money transfer system.

But the AIGF got a little hyperbolic by claiming that international gambling sites pose “a national security threat as these transactions lead to outflow of money outside India through unaccounted and clandestine means.” The letter goes on to claim that these moneys may be used for financing other illegal activities.

To be clear, the AIGF isn’t against gambling, only the kind not run by local operators. The AIGF urged Modi to consider the position of the Law Commission of India (LCI), which this summer issued a report recommending the central government legalize and regulate land-based and online sports betting by “Indian-licensed operators from India.”

Reaction to the LCI report was decidedly mixed, and the central government has so far shown little sign of prioritizing a betting legalization effort. Which leaves Indian gamblers with two choices: bet with fly-by-night shops runs by some truly sketchy characters or patronize any number of longstanding and highly regarded international operators.

It’s worth noting that GLaws founder Jay Sayta, a former AIGF general secretary, openly criticized the group this spring, suggesting it was on the brink of irrelevancy due to infighting among members and rank favoritism shown towards some local gaming operators.