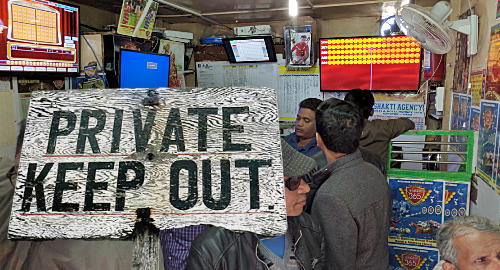 The Indian state of Sikkim will ban local residents from accessing sports betting shops run by Golden Gaming International following a ruckus in a public market.

Earlier this week, an anti-gambling activist vandalized a booth that Golden Gaming had set up in a market in Sikkim’s capital Gangtok. Channeling Jesus Christ dismantling the temple’s moneylending operations, Noel Sharma tore Golden Gaming’s booth to shreds before police could clap him in irons.

Sharma’s ire was reportedly sparked by his belief that Golden Gaming was illegally promoting betting on the 2018 FIFA World Cup. Golden Gaming was running a darts game featuring a spinning wheel emblazoned with the flags of World Cup countries. Participants were given Rs1k (US$15) coupons that could be used at Golden Gaming’s licensed gaming parlors in the state.

Local residents are already barred from entering the full-fledged casinos in Sikkim’s five-star hotels. Banning them from Golden Gaming’s shops would require the government to pass legislation amending the state’s gambling rules. It’s unclear what legal options Golden Gaming would have if locals are found inside its betting shops before such amendments are made.

Golden Gaming launched ‘online’ sports betting – actually, intranet betting via in-shop terminals – in Sikkim in May 2016 after the state approved the activity the previous year. The company now runs several betting shops in Gangtok and was issued a brick-and-mortar casino license last December.

The state had authorized betting under the expectation that the requirement for punters to be physically present while wagering would give its tourism industry a boost. Sikkim is currently the only state in India that permits such activity, which has led to a thriving illegal bookmaking sector in the rest of the country.