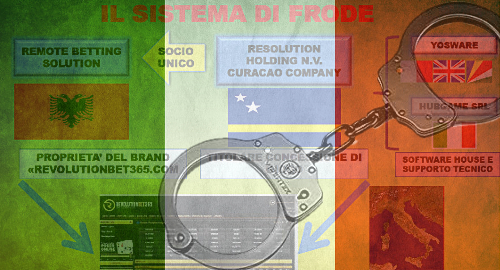 Italian authorities have arrested dozens of suspects in yet another crackdown on illegal gambling connected to organized crime.

On Wednesday, Italian police in Bari, Reggio Calabria and Catania, in coordination with the National Anti-Mafia and Counter-Terrorism Directorate, arrested 68 individuals and seized assets worth over €1b in a transnational investigation into illegal gambling operations that reportedly handled over €4.5b in wagers.

The arrested individuals face a battery of charges, including illegal gambling, money laundering, tax evasion and connections to organized crime. Three separate investigations were bundled into a single action after determining that the illegal gambling operations were interconnected.

In the Catania probe, the perps are believed to have netted a profit of over €50m between 2011 and 2017. These profits were then laundered through a variety of shell companies, most of which appear to have been based in Curacao.

Police said the betting brands involved in Wednesday’s action, some of which are licensed by local authorities, had operated “a parallel network of illegal collection” to their official operations. Police seized dozens of data transmission centers (CTD), internet cafés offering terminals linked to dot-com gambling sites based outside the country.

Police claim that many of the online gambling sites involved in these cases were licensed in Malta. Maltese-licensed sites have figured prominently in previous illegal gambling probes, and Italian authorities have complained loudly about not receiving sufficient cooperation from their Maltese counterparts.

However, Parliamentary Secretary Silvio Schembri said Wednesday that the Malta Gaming Authority had contributed to the ongoing probe, and that an agreement would soon be signed detailing future cooperation against illegal gambling.

Among the gambling domains cited in Wednesday’s busts are sites linked to Revolutionbet, Futurebet, Betcom, Betworld365, ParadiseBet and CenturionBet. The latter company had its Maltese license suspended in June 2017 for unexplained reasons, but Italian media has linked the site, along with its affiliated Bet1128 brand, to reputed Mafia figures.

Also named in Wednesday’s action was the SKS365 Group, which operates online in Italy under the Planetwin365 brand. However, Reggio Calabria prosecutors clarified that the investigation “concerned only the property / management that managed the company until 2017, or before its sale to new owners, against whom no elements of responsibility have emerged.” SKS365 issued its own statement saying it fully supports the authorities’ action.

Italy’s Deputy Premier Luigi Di Maio, who championed the country’s notorious crackdown on gambling advertising, said Wednesday’s arrests indicated that gambling was “fertile ground for the mafias, to obtain easy earnings and laundering dirty money.” Di Maio said the arrests indicate that “there is still a lot to do and we will not back down.”