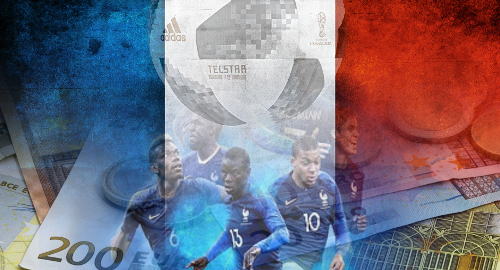 Figures released Friday by France’s online gambling regulator ARJEL show the nation’s online sports betting licensees handled wagers totaling €995m in the three months ending September 30. That’s just shy of the €1.002b reported in Q2 but an 81% improvement over Q3 2018 and the biggest year-on-year gain since the regulated market’s launch in 2010.

The tournament’s final match between France and Croatia generated betting turnover of €38.5m, the highest single-match total in the regulated market’s history, demolishing the previous record of €12.7m during the final match of the UEFA Euro 2016 tournament.

The World Cup had a knock-on effect on Q3’s other wagering, which grew 51% year-on-year, a higher rate than that recorded in the first half of 2018. France’s domestic football Ligue 1 and Ligue 2 reported turnover up 40% and 53%, respectively, while the English Premier League (+68%) Spain’s La Liga (+40%) and Italy’s Serie A (+51%) also enjoyed serious boosts.

Tennis remains France’s second-biggest wagering sport, and turnover nearly doubled in Q3 to €258.4m despite Wimbledon occurring at the same time as the World Cup. In fact, the only sport not to report a Q3 gain was basketball, which slumped 36% to €15m.

France’s online horserace betting market was also in positive territory for the quarter, with wagers up 4% to €254m, revenue up 6% to €63m and weekly average bettors rising 4% to 132k.

Finally, online poker continued to benefit from shared liquidity with Spain and Portugal, as cash game stakes shot up 13% to just a hair over €1b in Q3, while tournament fees improved 7% to €528m. Overall online poker revenue gained 3% to €59m.

The cash game growth represented an improvement on the 9% growth in Q2 but failed to match the 18% rise reported in Q1. Similarly, tournament growth failed to match either the 14% in Q1 or 10% in Q2. Overall poker revenue also fell short of Q2’s €60m, primarily due to cash game revenue falling 9% year-on-year as operators’ bonus offers shot up 44% year-on-year.