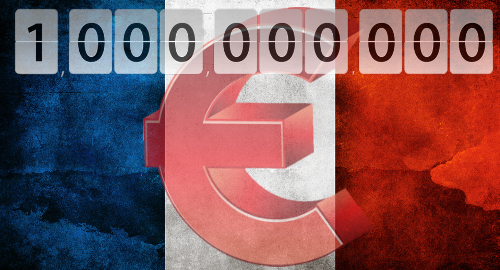 France’s online sports bettors wagered over €1b in the second quarter of 2018, driven by their nation’s masterful showing at the 2018 FIFA World Cup.

Figures released by French gaming regulator Arjel show the nation’s online sports bettors ponied up €1.002b during the three months ending June 30, a figure 61% higher than that recorded in Q2 2017. Sports betting revenue shot up more than two-thirds to €181m at the 12 sites licensed by Arjel.

The number of weekly active sports bettors rose 75% to 527k, drawn by World Cup action and operators splashing out €22m in bonus offers, more than twice the incentives dangled in front of bettors in Q2 2017.

Football accounted for 59% of all betting stakes in Q2, and the 50 World Cup matches that occurred in June attracted betting handle of €218m, representing 37% of all football wagers.

Horseracing wagers were also in positive territory, albeit by much tinier percentages. Total racing handle was €250m, up 5% year-on-year, while racing revenue rose 6% to €61m as weekly bettor ranks improved 5% to 136k.

The poker gains came in part due to bonus offers rising one-third to €19m, but also due to the ongoing expansion of shared liquidity with the regulated online poker markets in Spain and (more recently) Portugal.

The nation’s online gambler ranks are still overwhelmingly male, but while females still account for only 13% of the total, that was up one point year-on-year. Moreover, the growth in the number of female sports bettors was much higher (131%) than the male growth figure (85%). The percentage of female racing bettors was unchanged at 17%, while the poker tally slipped one point to 11%.