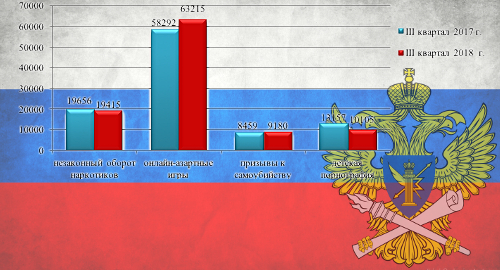 Russians are far more likely to be irked by online gambling sites than either drug trafficking or child pornography, according to the nation’s digital watchdog.

Russian telecom overseers Roskomnadzor recently released their third-quarter statistics on the types of complaints it received from the general public regarding suspected instances of online content forbidden under Russian law.

Roskomnadzor received 63,215 complaints related to online gambling in the three months ending September 30, nearly 5k more than the agency received in the third quarter of 2017. The online gambling stats dwarfed the next-highest complaint categories: drug trafficking (19,415 complaints), child pornography (10,105) and sites apparently promoting suicide as a fun way to while away an afternoon (9,180).

Online gambling’s overrepresentation on this chart likely has to do with the fact that Russians have been bombarded this year by brazen digital promos for illegal online casino operators such as Azino777. The company has liberally employed Russian hip-hop stars to rap rhapsodically about the joys of blowing your paycheck playing online slots.

Incredible as it may seem, the Q3 stats pale in comparison to those set in Q1, when a whopping 86,329 complaints were filed regarding online gambling. Through the first nine months of 2018, Roskomnadzor has received over 206k gambling-related complaints, a sum infinitely higher than any other category.

Meanwhile, Roskomnadzor’s ban-hammer was as busy as ever in the first week of November, during which another 3,119 gambling domains were added to the watchdog’s blacklist. The 14k domains blocked in October already pushed the year-to-date total up over 100k for the first time, but Roskomnadzor doesn’t appear interested in resting on its laurels in the year’s waning months.

In September 2017, Roskomnadzor met with Yandex and the other ‘Runet’ search powerhouses to discuss implementation of a system in which Roskomnadzor would auto-feed a list of newly blacklisted domains to the companies, which would be required to block the offending domains within 72 hours.