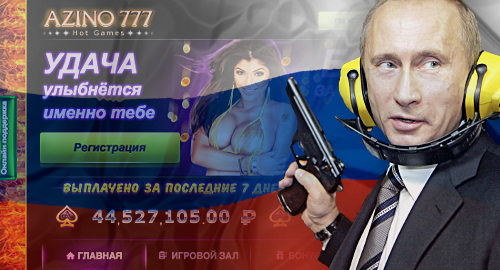 Online casino operator Azino777 was the top video advertiser on Russian-language internet sites in the first half of 2018, but its profile is growing dangerously high in Russian political circles.

This week, Moscow-based business daily Vedomosti published a report indicating that the Curacao-licensed Azino777 was the largest online video advertiser on Runet, the Russian-language internet community, in the first six months of 2018.

According to audience research firm Mediascope’s survey of desktop internet users aged 16-24 in cities with populations over 100k, Azino777’s online video promos accounted for 7.1% of all Russian-language online advertising, a higher ranking than international giants Pepsi and Mars, as well as local online heavyweights Yandex, Mail.ru Group and Google.

Intellectual property rights holders have begged Russia’s telecom watchdogs to do something about the videos, while last week saw the chairman of the country’s youth parliament beg the grownups to punish the rappers who so blatantly promote illegal activity.

This week, Leonid Levin, who heads up the State Duma Committee on Information Policy, Security and Communications, said there was little point in penalizing the hired stars of these videos, because the operators would simply start hiring foreign celebrities, like “Mike Tyson or someone else famous.”

Instead, Levin suggested targeting the “various services, functions, players that host such illegal advertising inside themselves” who by their acceptance of these ads “legitimize such actions.”

WHO IS AZINO777?
Meanwhile, Russian media outlet RBC posted a lengthy article this week on Azino777’s rise, although the operator has a typically tangled web of company filings that makes pinning down Azino777’s braintrust and ownership something of a challenge.

The article also revealed that Azino777 has at times claimed affiliation with western operators Novomatic and GameSys, claims that were vehemently rejected by those firms.

Russian financial institutions were ordered to block all unauthorized online gambling payments as of May 26, but RBC noted that there is as yet no formal registry of prohibited companies, meaning the banks have to rely on blocking transactions based on their merchant category code (MCC).

An RBC scribe opened an account with Azino777 to track its payment activity, which reportedly showed up on the writer’s Yandex.Money transaction record as MCC 6012 (financial services) rather than the MCC 7995 code applied to gambling activity.

There may come a day when Azino777’s formula for notoriety comes back to bite it in the ass. While Russia’s telecom gatekeepers have proven woefully incapable of blocking unauthorized signals from beaming across Russia’s borders, the government has amply demonstrated a low tolerance for being made to look foolish.