Russian bookmakers make out like bandits during World Cup 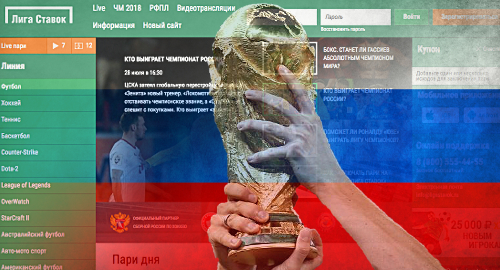 Russian sports bettors have one more bookmaking option at their disposal following the launch of GoldenBet LLC.

GoldenBet has reportedly aligned itself with the Bookmakers Self-Regulatory Organization (SRO), one of two rival outfits advocating on the Russian betting industry’s behalf (the other being the First SRO of Russian Bookmakers). Bookmakers SRO president Darina Denisova issued a statement welcoming GoldenBet into the fold and wishing the company the best of success.

It’s unclear whether GoldenBet plans to join the even smaller circle of Russian-licensed online betting operators. The company’s official website offers little in the way of a mission statement other than to say it’s in the gambling business.

RUSSIAN WORLD CUP BETTING BONANZA
Russian bookmakers, like those in virtually every other market, were expected to enjoy a serious surge in betting volume during the 2018 FIFA World Cup, but particularly given the Russian team’s surprisingly deep run into the event’s later stages.

By way of comparison, France’s licensed betting operators handled a comparatively paltry €690m during the World Cup. However, that figure doesn’t include operators serving the French market without the local government’s permission, and France has a population of roughly 67m, less than half of Russia’s 144m.

Russia’s official betting volume estimate for all of 2017 was RUB677b, of which roughly 60% was believed to be captured by Russian-licensed operators. Using that formula, Russian-licensed bookies’ World Cup handle would have been around €2b, which is still an outsized performance compared to France, even given the population difference.

Bookmakers Liga Stavok told Kommersant that, compared to an average month’s activity, the World Cup had boosted active customers by 2.4x, the number of bets by 1.5x and the size of individual bets by 1.3x. Liga Stavok says the 2018 tournament’s turnover was 8.6x that of the 2014 event and 4.3x the wagering on Euro 2016.

Liga Stavok claimed to have held just under 10% of its World Cup turnover, and the number would have been higher had the tournament’s final match not been such a goal-fest. Konstantin Gusev, director at Russian-licensed bookie Olympus, claimed his firm’s hold was an astonishing 18%.

The challenge now for all Russian bookies is retaining as many of those recreational World Cup bettors as possible as the local sector heads into its traditional slow month of August, which Gusev claimed will seem even slower this year following such a hectic period.