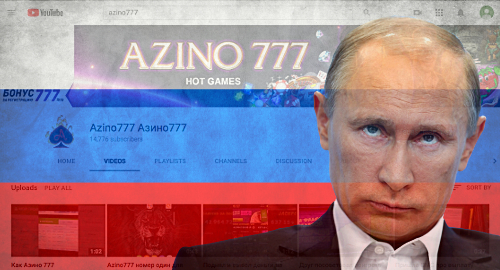 Earlier this month, Russia’s Federal Antimonopoly Service (FAS) announced that its ability to enforce its online edicts extended only as far as three Russian domains – .ru, .su and .рф — and thus it lacks the authority to prohibit Russian-language online advertising available on international sites such as YouTube.

The announcement came as a blow to Russia’s Internet Video Association (IVA), which had complained about Russian-language videos promoting online casinos such as Azino777 appearing on YouTube and (more importantly) on file-sharing sites offering bootleg copies of Russian intellectual property.

However, the FAS later announced that it would submit a “request” to YouTube’s owner Google to ascertain ways of preventing advertising of prohibited services from being beamed across Russia’s digital borders. The FAS also said it would convene a working group of “experts in the field of internet technologies and advertising” to crack this nut.

Three days after the FAS announcement, Russia’s telecom watchdog Roskomnadzor announced that it had blocked over 250 “pirate online cinemas and torrent trackers” due to their use of “illegal online casino ads and bookmakers.”

Despite admitting the ineffectiveness of its censorship efforts, Roskomnadzor currently bans over 1,500 prohibited gambling-related domains each week and recently announced that it had received 86,329 complaints regarding online gambling sites in the first quarter of 2018, more than six times the number of complaints in the same period last year.

READY… FIRE… AIM!
The latest example of Roskmonnadzor’s heavy-handed approach was its ‘carpet bombing’ of cloud-based instant messaging service Telegram, which was formally banned inside Russia on April 13 after refusing to transfer customer encryption keys to Russia’s intelligence services.

Subsequent analysis revealed that Roskomnadzor’s carpet bombing had reduced Telegram’s Russian customer traffic by only 7%. A clearly peeved Roskomnadzor boss Alexander Zharov claimed Telegram was “hiding behind a human shield consisting of transnational companies and respectable resources, with which they are hosted on the same IP addresses.”

Despite the criticism of Roskomnadzor’s tactics, Zharov was unrepentant, claiming that “all the recent terrorist acts” in Russia were “coordinated through the Telegram messenger … If I choose between comfort and security, I personally choose security.” But as Benjamin Franklin famously observed, “those who would give up essential Liberty, to purchase a little temporary Safety, deserve neither Liberty nor Safety.”