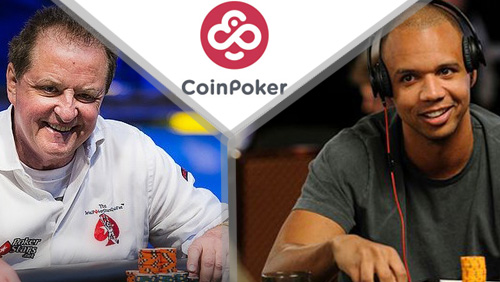 Three stories that have no more to do with each other than a golf range, a car wash, and an episode of the Tellytubbies, including Pierre Neuville writing a book, The Borgata in pursuit of Phil Ivey and CoinPoker launching Short Deck.

Days after Greg ‘Fossilman’ Raymer released his new book on tournament poker via D&B Publishing, another celebrated personality of poker has done the same thing.

Pierre Neuville has released a new book called Offer Yourself Happiness and has created a webpage where you can get your hands on 1,000 advanced copies, signed by Neuville, with a dedicated tribute to boot.

Neuville, who describes himself as a passionate amateur poker player, writes about his interactions with a broad range of celebrities from Hollywood, sports and poker.

Here are some of those interesting people.

The book is available in both English and French.

Neuville was once the proud owner of a gaming company, which he sold to Hasbro, and stayed on as Vice-President for a decade. The Belgian star achieved notoriety when qualifying for 23 consecutive European Poker Tour’s (EPT) via online satellites, leading to a position as Friend of PokerStars. I once had the honour of watching Neuville compete with Mickey Peterson, heads-up, for the EPT title in Copenhagen, which Peterson won. In 2016, Neuville finished runner-up in a World Series of Poker (WSOP) bracelet event, losing to Mike Cordell in a $1,500 No-Limit Hold’em 6-Handed clash.

In 2015, the poker world recognised Neuville’s contribution to the game by handing him the Lifetime Achievement Award during the European Poker Awards. During his acceptance speech, Neuville told the crowd that the best was yet to come. He wasn’t kidding, later that year he finished 7/6420 in the WSOP Main Event, earning a career-high $1.2m.

Neuville has won $4.5m in live tournaments and has four titles to his name.

They say the early bird gets the worm.

Borgata – you had better start waking up earlier.

The U.S. Court system has given the Atlantic City casino the green light to retrieve the $10.1m Phil Ivey won playing Baccarat and Craps during the now-famous edge sorting debacle.

Only they can’t catch him.

According to Cardplayer, October 9 court filings show, that the Borgata has made a special request to the U.S. District Court for the District of New Jersey seeking permission to look into Phil Ivey’s assets in the state of Nevada after a search of his New Jersey bank account revealed nothing but toe jam.

“Borgata has been unable to locate any assets of Defendants in New Jersey.” It continued. “Borgata identified a bank in which Ivey maintained an account. A writ of execution was returned, and the bank indicated there were ‘no funds.'”

Attorney’s working for the Borgata have unearthed an LLC based in Nevada under Ivey’s name, said to be the home of the guts of Ivey Poker and the Ivey League.

The curse of social media strikes again, as the Borgata legal team has also picked up on Ivey’s rarely used channels that he owns a home in Cabo, Mexico.

The court documents stated that Ivey is worth an estimated $100 million.

Ivey’s legal eagles have appealed the $10.1m judgement. The Borgata has cross-appealed, wanting close to $30m, and not the $10.1m that is currently playing hide and seek better than my kids.

The Borgata has requested a court hearing date of November 5 with regards to the Nevada bits and pieces.

Short Deck is the latest craze to sweep the globe, and it was Phil Ivey who won the first-ever live Short-Deck, Ante-Only tournament, beating 61-entrants, including Daniel Cates, heads-up, to bank (not in New Jersey) $604,992 during the 2018 Triton Poker Series event in Jeju, South Korea.

Since then, Short-deck has gone viral.

Not only is it a mainstay in Triton Poker circles, but Poker Central have included it in the Poker Masters, Poker After Dark and the US Poker Open. America’s Cardroom and PokerStars are rumoured to be including a version of the game shortly, and a few weeks ago (I know, I am slow), CoinPoker became the first cryptocurrency online poker room to host the game in cash game format only.