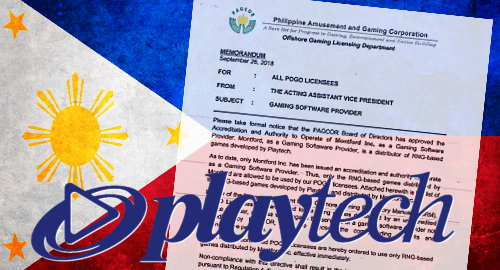 The Philippines’ gambling regulator has announced that UK-listed technology supplier Playtech is now the monopoly provider of RNG casino games to the country’s online gambling licensees.

In a memorandum dated September 26 obtained by CalvinAyre.com, the Philippine Amusement and Gaming Corporation (PAGCOR) announced that Montford Inc. has been certified as a Gaming Software Provider for Philippine Offshore Gambling Operator (POGO) licensees.

Montford is described in the announcement as “a distributor of RNG-based [random number generator] games developed by Playtech.” PAGCOR says that “to date, only Montford Inc. has been issued an accreditation and authority to operate as a Gaming Software Provider. Thus, only the RNG-based games distributed by Montford are allowed to be used by our POGO licensees.”

This new restriction is “effective immediately” and POGO licensees “found to be using games developed by an unauthorized service provider, or those who engage the services of a gaming software provider not accredited by PAGCOR, shall be imposed the corresponding demerits and administrative penalties.”

The short-term penalty for continuing to use RNG games other than Playtech’s is the imposition of 20 demerit points as called for in PAGCOR’s Offshore Gaming Regulatory Manual (OGRM). “Continued non-compliance” with the new RNG monopoly “shall warrant the temporary cessation of your operations and the eventual cancellation of the offshore gaming license of erring POGO licensees.”

PAGCOR has yet to indicate whether it intends to issue accreditation to other RNG game providers. Playtech undoubtedly produces some quality RNG games but, as one POGO licensee confided to CalvinAyre.com, “we can’t pull everything and only offer Playtech. That’s ridiculous.”

Playtech’s new monopoly over the POGO market – which comprises the bulk of Asian-facing online gambling operators – definitely puts operators in something of a bind. One can’t help but think of Henry Ford’s legendary quote regarding the options facing Model T buyers: “You can have your car in any color you want, as long as it’s black.”

Perhaps this new monopoly is what Playtech was referring to in July when it said it was taking steps to “protect Playtech’s position in the [Asia-Pacific] region and to drive revenue generation.” At the time, Playtech’s shares had shed over one-quarter of their value due to the company’s warning that new market entrants had created “a particularly aggressive pricing environment.”

Playtech’s significant grey- and black-market Asian-facing operations have proven both a driver of the company’s revenue and its Achilles heel, subject to sudden shocks as local police forces launch crackdowns on Playtech’s Asian-facing partners.

The product has yet to launch, but Playtech also enjoys an online casino monopoly in Poland, after being selected as the sole technology partner for the ‘eKasyno’ offering of lottery and gaming monopoly Totalizator Sportowy.