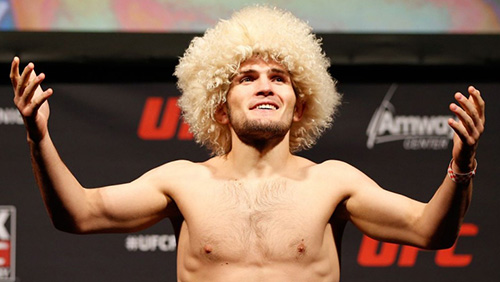 It’s probably the most anticipated mixed martial arts fight in history – and certainly the most hyped ever – on Saturday night at UFC 229 in Las Vegas when Russian Khabib Nurmagomedov (26-0) defends the lightweight belt against former featherweight and lightweight champion Conor McGregor (21-3).

McGregor, who was the first fighter in UFC history to hold two belts simultaneously, never actually lost either one. He was stripped of both due to inactivity. “Notorious” hasn’t been in the Octagon since winning the lightweight title vs. Eddie Alvarez at UFC 205 in November 2016. McGregor then had a beef over money with the UFC, had a kid and tried his hand at boxing, losing to Floyd Mayweather Jr.

It should be a fascinating study in contrast as Khabib does most of his damage on the ground, while McGregor inflicts his standing up. There are many props available for this mega-bout. That the fight goes the full five rounds is a +285 underdog, with not going the distance at -475.

Khabib has gone five full rounds just once, but then again he has only fought for a title once and those are five-rounders. That was in April when Khabib became undisputed lightweight champion with a unanimous decision over Al Iaquinta. Overall, 10 of Khabib’s victories are by decision. McGregor has done the distance once: His rematch against Nate Diaz at UFC 202, which McGregor won by majority decision.

Fight fans shelling out the big bucks on pay-per-view or lucky enough to see the fight live in Las Vegas likely don’t want a quick result. That the fight fails to complete one full round is +190, with it going to at least Round 2 at -280. Khabib hasn’t had a first-round win since January 2013 against Thiago Tavares. That was eight fights ago. McGregor became one of UFC’s biggest stars with his stunning 13-second knockout of featherweight champion and legend Jose Aldo four fights ago. If this ends in Round 1, it’s likely a McGregor win simply because of styles.