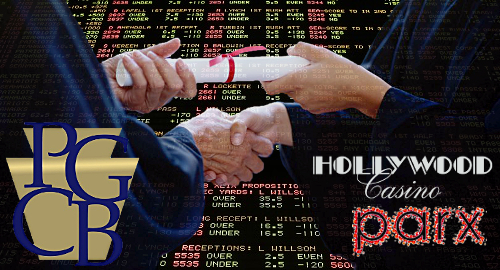 Pennsylvania has issued its first sports betting licenses, although it will be a while before punters can place a legal wager at a local casino.

On Wednesday, the Pennsylvania Gaming Control Board (PGCB) approved sports betting license applications by Penn National Gaming (PNG) and Greenwood Gaming & Entertainment (GGE), the first of many such awards the PGCB expects to issue to the state’s 13 licensed casinos.

A Parx official told the PGCB that the plan was to launch land-based wagering by November, with online and mobile wagering to follow in January 2019 (Parx has partnered with gaming tech firm GAN for both online and offline wagering). PNG, which has a land-based betting deal with William Hill US and an online deal with International Game Technology, said its land-based sportsbook would be ready sometime in the “next few months.”

Five of Pennsylvania’s 12 existing casinos have so far applied for sports betting licenses, the others being Rush Street Gaming’s SugarHouse in Philadelphia and Rivers Casino in Pittsburgh, along with Caesars Entertainment’s Harrah’s Philadelphia property.

The interest comes despite the state demanding a $10m upfront license fee, not to mention the punitive 36% tax on sports betting revenue the state will impose on licensees, which some observers have suggested will render betting unprofitable, except for indirect revenue generated by convincing more customers to visit the casinos.

In other PGCB news, the regulator also approved its sixth and seventh online gambling license applications on Wednesday. The diplomas went to the Sands Bethlehem casino, which was recently acquired by Wind Creek Hospitality, and Boyd Gaming’s Valley Forge property. The PGCB is set to award its unclaimed online licenses to ‘qualified gaming entities’ via a ‘blind random drawing’ next month, but there’s still no word on when any of these online operations might actually launch.

Finally, Wednesday saw the PGCB slap a $95k penalty on SugarHouse for (a) seven incidents in which its croupiers failed to properly address automated shuffler warnings, leading to games being played with compromised decks, and (b) failing to comply with rules for Spanish 21 blackjack that also led to play with compromised decks.