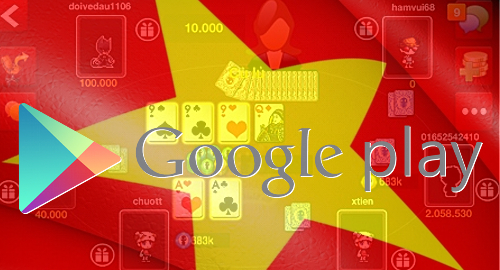 On Wednesday, Vietnam’s Ministry of Information and Communications announced that Google had complied with its request to remove 56 Vietnamese-language real-money gambling apps – primarily offering card, casino and lottery games – from the Google Play online marketplace.

The VNS media service reported that 16 of the apps were found to be illegally exploiting users’ data in violation of Google Play rules, while the other 40 apps were removed at the request of Vietnam’s Authority of Broadcasting and Electronic Information for failing to observe Vietnam’s strict prohibition of online casino gambling.

In August 2017, Google relaxed its longstanding prohibition on real-money gambling apps, but only in the UK, Ireland and France. Helena Lersch, Google’s head for Public Policy and Government Relations for Asia–Pacific markets, was quoted on a Vietnam government website saying the company would remove gambling apps if they are flagged by local authorities.

In August, Google’s rival Apple reportedly purged thousands of gambling apps from its China-facing App Store, following a report by China’s state broadcaster on the availability of the apps despite China’s unwavering criminalization of all forms of online gambling.

3IN1BET NOT SUCH A GOOD BET
In other Vietnamese gambling news, police in Thanh Hoa province have arrested the alleged ringleader of an illegal online gambling operation. VNExpress reported that 48-year-old Lam The Tai was one of five individuals detained on Sunday for allegedly running an illegal football betting operation that placed wagers online via password-protected 3in1bet domains.

In April, authorities in Vietnam’s Vinh Phuc province filed charges against a 3in1bet-linked gambling ring, although in that case, the ringleader was identified as one Luu Van Nam. It’s unclear whether this weekend’s arrests are directly connected to the same operation.

Vietnam has been making tentative steps over the past few years toward relaxing its prohibitions on (a) sports betting and (b) locals gambling in casinos, but so far these pronouncements have been more smoke than fire.