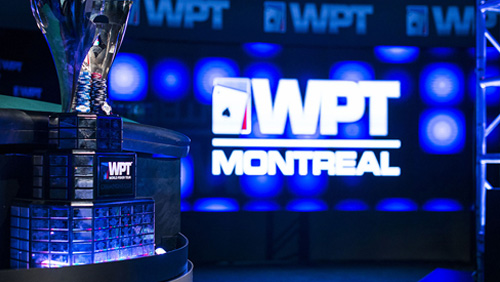 The World Poker Tour (WPT) and Partypoker LIVE have launched a series of promotions through their new partnership that will award several players the opportunity to participate in events in Europe and Canada. The first install of the promotions will take place this October during the WPT Montreal festival at the Playground Poker Club. The schedule for the festival has now been released, and the festival will include even more Partypoker promotions.

The series will run from October 21 through November 4. This will be the first year that all of the WPT’s flagship tournament can be found during a single festival. The lineup contains the WPT 500, WPTDeepStacks, a High Roller event and a Ladies tournament, as well as the Main Event. Some of the highlights include:

There will be three additional promotions provided by Partypoker beginning with the WPT Montreal. All three LIVE promotions will award one player with a year-long sponsorship deal.

If a player wins the WPT500 after buying in with PP Live Dollars, that winner will earn a $50,000 sponsorship package for any Partypoker LIVE event within the following 12 months. It is only open to the first 200 players who use Live Dollars to buy into the event.

The second promotion is similar, but centers on the WPTDeepStacks event. It is open to the first 100 players who use Live Dollars, and the winner will receive a $50,000 sponsorship package.

The last promotion is for the WPT Montreal Main Event. If one of the first 100 Live Dollars players takes the event down, he or she can claim a $100,000 sponsorship package.

For all three packages, the winners get to keep all of the earnings—Partypoker doesn’t get a cut. That should make the promotions extremely tempting.