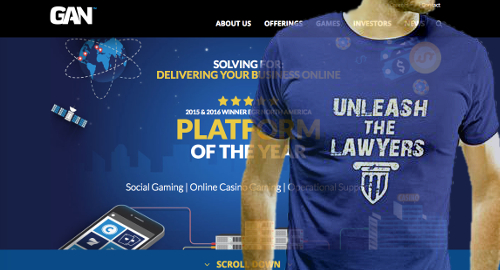 Online gambling technology provider GAN has sicced lawyers on US gaming operators it believes are using its patented technology without permission.

Irwin’s attorneys will focus on operators plying their trade in New Jersey, Nevada, Delaware and Pennsylvania, i.e. the four US states that have authorized intrastate online gambling activities (although Pennsylvania has yet to actually launch its online market).

The attorneys will seek commercial settlements with operators that have engaged in “prior and continuing infringements” and who have been “substantially and progressively placed on notice” of GAN’s claims to its technology rights.

GAN suggested that its efforts to rein in unauthorized use of its US-patented technology – which received its original diploma from the US Patent & Trademark Office in September 2014 and was reissued last year following an unsuccessful legal challenge – could represent a “potentially high-margin incremental income stream.”

GAN’s investors appeared to focus more on the ‘potential’ nature of that revenue stream, as the company’s UK-listed shares were up less than 1% on the day, while GAN’s Ireland-listed shares fell nearly 5% at the close of trading.

GAN is set to release its financial report card for the first half of 2018 on September 28, and the company said it would provide further updates to its new patent protection scheme at that time.

GAN originally set down its US roots through the spread of its Simulated Gaming social casino operations, which it has licensed to 14 US land-based casino operators. The company also has real-money deals with two New Jersey online licensees and one Pennsylvania casino, and raised $10m in May to further its US sports betting ambitions.