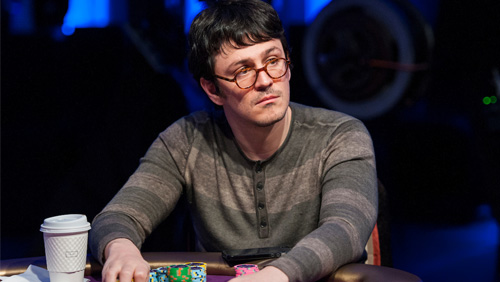 Isaac Haxton is one of the favourites to win the 2018 Poker Masters after making three final tables, and taking down the 300-points for winning Event #4: $10,000 Short-Deck, the first time he has played the game.

When Isaac Haxton walks down the Las Vegas Strip, heading to the ARIA to go ‘to work’ every single cock like weather vane spins on its axis. Like Steffen Sontheimer, a year ago, ‘Ike’ has turned into a 1930s Frank Baum cyclone.

Haxton was in Montenegro when the Triton Poker Series cut the ribbon that connected Short-Deck to the secret card rooms in Asia, slamming champagne bottles into the heads of the first Westerners who tried it, and bubbles are still rising.

I didn’t ask him, why, but assume the feedback I had from the likes of Stephen Chidwick and Steve O’Dwyer applies – $32,000 is a lot of money to punt on a game you’ve never played, especially when it contains more sharks than Gansbaai, South Africa.

Let’s see how he did it.

The Journey to The Top

54 entrants joined Haxton in the event. At the end of Day 1, we had a final table of six.

Of those in the hunt for an event win, only Cary Katz and Andrew Robl had ever played this game before, with Robl the most experienced, having played the game in the Asian cash games. Katz brought Short-Deck to the ARIA after finishing second in the HKD 1,000,000 (USD 127,000) buy-in Short-Deck event at the Triton Poker Series, Jeju, earning HKD 13,920,000 (USD 1,773,722).

Both Haxton and Katz were cashing for the third time in the series; Nitsche for the second time.

The 888Poker ambassador may have begun with the chip lead, but that didn’t stop him becoming the first player to exit stage left.

Nitsche looked down to see pocket jacks before jamming for 1,440,000, and Haxton called with pocket tens. Nitsche was in great shape to double-up until the board ran out with a straight for the American. Nitsche was out, banking $33,000; Haxton was the new Table Captain.

Then we lost Mr ARIA.

Katz limped into the pot with KQhh, Haxton moved all-in, holding AdTc and Katz made the call. The Poker Central owner took the lead after flopping a pair of queens, but Haxton turned an ace and rivered a ten to eliminate the man responsible for the renaissance of high stakes tournament poker in Las Vegas.

The most experienced Short-Deck player left next.

After falling short, Robl made a move holding T9o, and Ryan Tosoc made the call with QJo. Tosoc flopped trips and turned a boat. Robl, who was a good bet to be barnacled to his seat until the bitter end, was out earning $55,000.

Ike Haxton would face Maurice Hawkins heads-up for the title after Ryan Tosoc left the building in third place. Tosoc jammed for 490,000 holding ATo, and Haxton took him down to Mansfield Town after calling with AJo.

There wasn’t much between the pair when heads-up started, but Haxton sprinted towards a 2:1 chip lead with a series of winning pots. Hawkins fought back like the true champion he is to retake the lead, and then Haxton doubled into the advantage AJ>QQ.

Hawkins doubled once more, straight over straight, and then the clocks stopped ticking.

Hawkins went for it holding 97dd, and Haxton called with AQ. The dealer gave Haxton a second ace on a flop that also gave Hawkins a straight draw, but the Kc and Qh weren’t the cards Hawkins wanted to see, and he was out in second place for $115,500. Ike Haxton had won only the fifth poker tournament of his career.