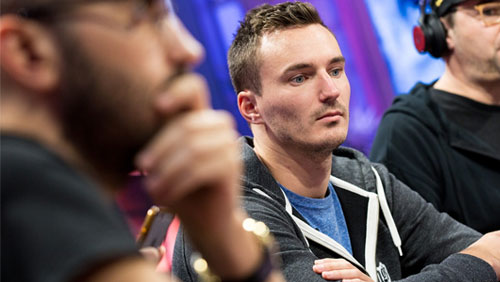 The Poker Masters Champion, Steffen Sontheimer, qualifies for the Super High Roller bowl via the backdoor after Andrew Robl withdraws at the last minute, leaving question marks over why they didn’t select The Goose in the first place.

1998-99 was the finest year in Manchester United’s history, and that’s saying something given the rich tradition of the most famous football club in world football.

It began with Sir Alex Ferguson’s men winning their fifth Premier League title. The league and cup double came next when Teddy Sheringham and Paul Scholes secured a comfortable 2-0 win over Newcastle. It ended with complete and utter mayhem when United came from a goal down to beat Bayern Munich in the final of the Champions League with both goals coming in the three minutes that Pierluigi Collina had awarded for injuries.

Collina would later say it was the greatest game of his career, and at the end, the crowd sounded like a lion’s roar.

Now, imagine if the FA didn’t allow United to compete in the FA Cup.

There would be no chance of the treble.

And it’s not just football.

Tennis has the Grand Slam of Wimbledon, Australian Open, French Open and US Open. What would happen if one of these majestic institutions prevented a player from realising a Grand Slam by not allowing them to play?

Well, it nearly happened in poker.

The Near Culling of The Goose

Earlier this week, Poker Central announced plans to create an ARIA High Roller Player of the Year, and with it came the formation of the High Roller Triple Crown of The US Open Open, The Poker Masters and The Super High Roller Bowl (SHRB).

Nobody can win the Triple Crown this year because Stephen Chidwick won the US Poker Open, and Steffen Sontheimer won the Poker Masters. But it would have been a compelling narrative if one of these fabulous players went on to finish the season with a second victory in the SHRB.

The incredulous decision by Poker Central and the ARIA to choose SHRB players based on a lottery meant that both Chidwick and Sontheimer would have to cross their fingers and pray that they became a part of the 2018 SHRB.

Here were the first 30 players drawn at random.

As you can see, Chidwick made the cut. Sontheimer didn’t.

I am positive Sontheimer wasn’t worrying at this time. He’s a smart lad. As the reigning Poker Masters champion undoubtedly his inclusion was a foregone conclusion with the tournament organisers handpicking the next 18 players.

The organisers hand-picked 15 players, added a satellite qualifier, and still no Sontheimer.

The Netflix of the poker world no a thing or two about cliffhangers.

Look, I’m not picking holes in the personalities or poker skills of Larry Greenberg or Sean Winter, or anyone else that Poker Central and the ARIA chose to include in their tournament. But how did the team that created and trademarked the High Roller Triple Crown, and are now advertising its importance, miss the fact that it would be absurd NOT to include the Triple Crown tournament winners?

Even worse, they felt that 17 poker players were more suitable than the reigning Poker Masters Champ.

I reached out to the Poker Central crew for a response, but I didn’t receive one by the time I went to print. I reached out to Sontheimer who confirmed that he had applied for a position as early as the 30-person lottery and harboured hope that they would select him every step of the way.

So I am left wetting my finger and sticking it in the air.

My assumption is the casting crew didn’t want to fill the lineup with Germans. Off camera, these guys are a lovely bunch of coconuts, but when they sit down to play, there is a professional seriousness about them. Perhaps the production team didn’t feel adding another German crusher to the team would be good for TV even if it was one of their Triple Crown champions.

In almost a mirror repeat of that 1998-99 Champions League Final, you nearly saw a German lying on the grass, tears streaming out of his eyes wondering what the fuck happened? Only this time Team Germany won in injury time after Andrew Robl developed a reason not to get involved, and the casting crew sent out the call, and the Goose came flying in to take a seat in injury time.