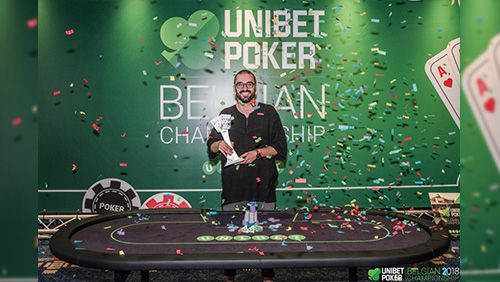 3: Barrels of a Unibet flavour as Christophe de Meulder wins in Belgium, the online poker room sponsor the International Poker Open, and return to Dublin after a seven-year hiatus.

They have some of the best footballers in the world, cracking French fries, and some decent poker players.

And the De Meulder twins, one of which took down a tournament on home soil this week.

The event brought in €219,000 in prize money, and De Meulder topped the 63 people who made money, banking the first prize of €42,020 after his pocket fives beat 86cc all-in, pre-flop in the final hand of his heads-up encounter with Samir Akhoullou.

Christophe and his brother Matthias once represented Belgium as members of PokerStars Team Pro before the online giant let them go in January 2016.

Christophe’s victory in the Casino Blankenberge was his third live tournament victory, and the second in the Belgian Championships after taking down a €220 buy-in event beating 127 entrants to bank the €6,585 first prize back in 2016.

The Belgian Championship victory is De Meulder’s most significant of his career, coming a few months after his previous best of €38,250 for finishing 6/1716 in the €1,100 No-Limit Hold’em Open at the partypoker MILLIONS Grand Final Barcelona.

Unibet to Sponsor the International Poker Open in Dublin

In other Unibet news, the online poker room and casino are set to sponsor the International Poker Open (IPO). The series returns to the Bonnington Hotel, Dublin for its 12th appearance on the poker calendar in October.

The star attraction is a €300 buy-in, five-starting flight Main Event running 25-29 October. There is also a €550 High Roller, and the APAT €210 buy-in Irish Amateur Poker Championship is also on the menu.

After the IPO, Unibet remains in Dublin for their very own Unibet Open. The Open runs between Nov 21-25, with the €1,100 Main Event the star attraction, alongside a €2,200 High Roller and a €110 #QueenRules Ladies Event.

There have been three Unibet Opens in 2018 thus far.