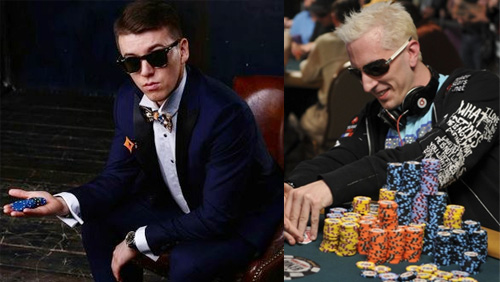 I was standing outside the boss’s office holding a panel of wood (soon to be part of a kitchen counter). I had been there for 30-minutes. My back was aching. It was my first day of work. Sweet 16. After sanding the piece of wood, I asked my foreman what to do with it.

“Go upstairs, and ask the boss for a long weight.” He said.

“What do I do with this?” I asked, pointing to the smoothest piece of wood I had ever manhandled.

It would be an hour before I figured it out.

The kitchen fitter life was never for me.

I fell for the lot.

So I was relieved when I got a job on the railway. For the next 19-years, I would refer to myself as a railwayman.

I thought it was the best job in the world.

I decided to become a professional poker player in the interim.

Within a fortnight, I had found the best job in the world, again.

There is a lot of marketing and branding crap floating around in the universe that poker calls home.

So it was refreshing to watch partypoker’s latest promotion #bestjobintheworld.

The online poker room created a fake job advert, posted it online, and held bona fide job interviews via Skype where an actor delivered all the benefits of the new gig, before finally revealing that the job was that of a professional poker player.

After watching the video, I reached out to some of partypoker’s most excellent, to ask them why they feel they have the #bestjobintheworld, and this is what they had to say.

Natalia Breviglieri joined the team back in August 2014. The UK-pro said she has the #bestjobintheworld because she gets to meet so many amazing people, and make lifelong friends. Travelling the world is another significant benefit (as is eating all of the food) and Breviglieri says you can’t beat the adrenaline rush she gets everytime she plays.

Anatoly Filatov is the hottest member of partypoker’s team right now after winning the MILLIONS Russia Main Event for close to a million bucks. The smartest dressed player in poker concurred with Breviglieri that travelling and meeting great people make poker the #bestjobintheworld, but also added the benefit of always learning something new.

partypoker’s Austrian ambassador, Josip Simunic pointed to the intense competition and the personal freedom that poker provides as the primary reasons he has the #bestjobintheworld. Bertrand “ElkY” Grospellier echoed previous sentiments suggested playing a game, liberty and travelling flick his buttons. And Phillip Gruissem says the reason he has the #bestjobintheworld is that poker rarely gets boring, he has financial, logistical and mental freedom, and he is part of a travelling circus of interesting people of all walks of life.

Finally, the Welsh Wizard, Roberto Romanello, says he has the #bestjobintheworld because of the interesting people he meets when travelling, the buzz he gets when winning, and the opportunity to share the spoils with his family.

What do you think is the #bestjobintheworld and why?

Two of the partypoker peeps who said they have the #bestjobintheworld had a brilliant start to the $60m Guaranteed POWERFEST.

35 of the 670 events are in the bag, and both partypoker ambassadors made the final table of the $5,200 $1m GTD Championship Event.

Did you notice that none of the previous ambassadors suggested money as a primary motivator as to why they have the #bestjobintheworld?