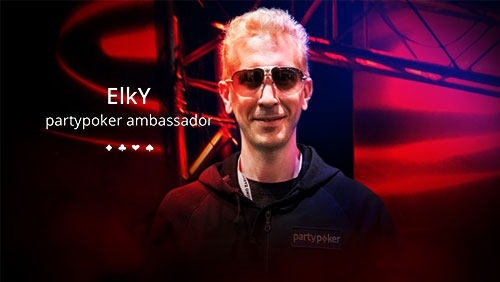 The long-time PokerStars ambassador, Bertrand ‘ElkY’ Grospellier is taking their trade secrets to partypoker as the leader of the partypoker.eu movement and some of the very best in the game compete for the €1.7m first prize in the MILLIONS Grand Final in Barcelona.

There is the way a company appears to function. Mission statements. Branding. Advertising. Cheshire cat style grins. The singular message.

And then there is the truth.

Only the people allowed into the inner sanctum get to see the truth, but even those who get close to it feel the authentic vibe of the place.

I’m not sure how close Bertrand ‘ElkY’ Grospellier got to the inner sanctum of PokerStars. But I do know he enjoyed a special relationship with Isaia Scheinberg, and that’s a guy who spent a lot of time redecorating that inner sanctum.

And so, if PokerStars is in your crosshairs, and you are about to pull the trigger, then hiring someone of ElkY’s ilk can only be a good thing, right?

When ElkY left PokerStars in January, it shocked me. Without giving the news much thought, I assumed he was the perfect ambassador for poker. But assumptions will be the death of me.

The talk on the grapevine was that ElkY was on a big contract at Stars. Think big, and then double it and triple it big. He lived in the Czech Republic {hardly a locale that PokerStars was pummeling} and his role at Team Liquid meant he wasn’t applying as much focus on poker as he was when he was winning Triple Crowns in between sessions of Donkey Kong. PokerStars’ newest recruits are sluggers. These new kids are hitting Twitch and hitting it hard. ElkY wasn’t putting in the time.

I imagine his contract was up, and Stars either wanted him to do more for less or just wanted him off their payroll because he no longer squeezed into the Team PokerStars mould. Either way, ElkY was unemployed in the poker world for the first time in 11.5 years, and when I covered the story, I told you that it wouldn’t take long for partypoker to snap him up.

partypoker has advised via email that ElkY is the newest member of the ambassadorial team, and wore the patch for the first time in the €10k High Roller at the MILLIONS Grand Final in Barcelona.

The French All-Time Live Tournament money earner will spearhead partypoker’s .eu rebirth. The new shared liquidity site will open later this month for Spanish and French players {will a top Spanish player be following him onto the payroll?)

The press release stated that Elky’s role would be to ‘facilitate effective communication channels between partypoker and the poker community.’ In contrast, ElkY’s PokerStars departure post spoke of his inability to function in this role at Stars towards the end of his career.

partypoker has promised the Spaniards a ’significant software upgrade’  with further upgrades planned in the future alongside a new MTT schedule, and new MTT festival calendar.

“The poker universe we want to build is for the players.” ElkY posted on Twitter.

Let’s hope he has the time to help them do it.

As you would expect, paying €10,300 to compete in a tournament, the cream has evidently risen to the top of the partypoker MILLIONS Grand Final in Barcelona.

Three people will receive a €1m+ prize, culminating in a €1.7m winners check, and the final table is outstanding.

Other notables who wore the Hulk Hogan yellow bandana in this thing for a while were Sean Winter (11th), Byron Kaverman (16th) and Anton Wigg (17th).

We will bring you a winner, tomorrow.