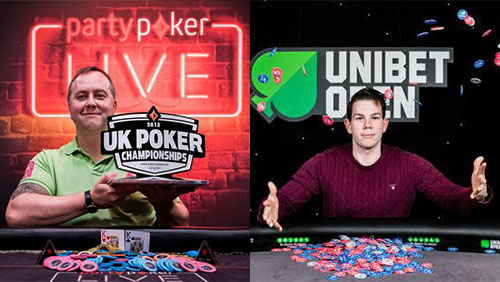 Two major UK live tours to catch up on including victories for Chris Brice in the partypoker LIVE UK Poker Championship, and Andreas Wiborg in the Unibet Open London.

If partypoker LIVE were a lawnmower, it would be one of those fancy things that people drive, while the rest of the competition stand riddled with sweat after pushing all day.

Another successful competition is in the books. Remember when partypoker missed guarantees with higher frequency than Frank Bruno missed punches? They are loooooong gone.

It was another example of the effect of run-good in poker. Steven Morris, the winner of the £5,300 High Roller, finishing fifth to add another £40,000 to the £70,000 he won when competing with the sharks.

The winner was Chris Brice, who before this event, had few scores on his Hendon Mob profile, but took the £187,500 first prize after beating Daniel Clark in heads-up action after the sick set up of KK>AK materialised in the final hand. The 37-year-old from Cheltenham never experienced an all-in for his tournament life throughout the entirety of the event.

Next up for Brice?

My type of man.

Other stars with personalised number plates containing phrases like EAT F1SH who went deep in this one were Manig Loeser (16th), Ben Vinson (17th) and Chris Sly (19th).

Heading North to South and a Norwegian student has taken the top honours in the first event of Season 11 of the Unibet Open.

The event attracted 349 entrants for a total prize pool of £314,100. Unibet paid 47 places, and Wiborg cut a deal with Jonathan Schuman when heads-up (HU) that left £6,500 in the middle. HU lasted 30minutes before the Norwegian student mopped up the rest of the cash.

It was Wiborg’s third cash in a Unibet event. He finished runner-up to Barry Mills in the 2016 Unibet UK Poker Tour event in Glasgow winning his previous best score of £6,640. Last year he finished 13th in the same tour, this time in Nottingham.

Unibet’s attention now turns to the first of four online festivals. The Unibet Online Series (UOS) began Mon 26 Feb and has over 80-events at price points ranging from €0.10 to €100.