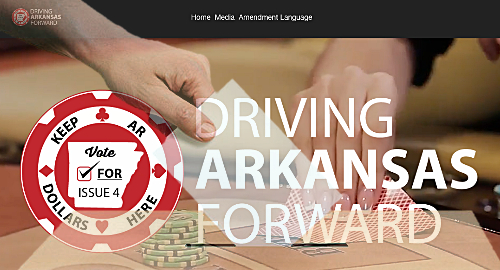 Arkansas voters will finally get a chance to weigh in on whether their state should authorize two new casinos and expand gaming options at two racetrack casinos.

On Wednesday, the Arkansas Secretary of State’s office announced that pro-casino lobby group Driving Arkansas Forward (DAF) had obtained 99,988 valid signatures on a ballot petition, exceeding the 84,589 signatures required for the casino question to appear on this November’s election ballot.

Issue 4 on the November 6 ballot seeks to authorize one new casino in each of Jefferson and Pope counties, while allowing the slots-only casinos at the Oaklawn and Southland racetracks to add live table games and sports betting.

The Quapaw tribe has land held in trust in Arkansas, which the tribe claims as its ancestral home. The Quapaw operates two gaming venues, the Quapaw Casino and the Downstream Casino Resort near Oklahoma’s borders with Kansas and Missouri. Cherokee Nation Businesses has nine gaming venues across northeast Oklahoma, including the Hard Rock Hotel & Casino Tulsa.

Arkansas voters were all set to vote on a similar casino question on the 2016 ballot but the question was pulled just weeks before the vote. Seems the state Supreme Court pointed out that the proposal would have authorized sports betting, which at the time was still prohibited under the federal PASPA laws, which were struck down by the US Supreme Court this May.

DAF’s original pitch was that the money raised from taxing casino gambling could help fund highway repairs but the state Highway Commission pointed out that the casino revenue would actually flow into the state’s general revenue coffers. DAF subsequently amended its logo to remove a highway image and text references to ‘roads’ but kept its original name, figuring that the driving reference still applied.