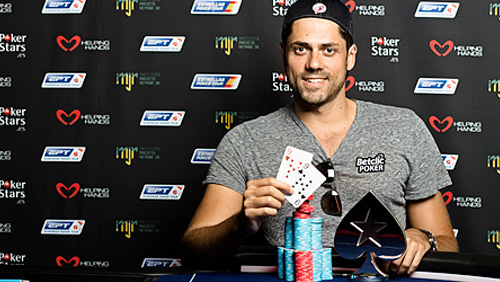 With blinds at 40,000/80,000 with an equally gruesome Big Blind Ante, Timothy Adams is first to act and raises to 160,000. Matthias Eibinger, who has been flicking people around like flies on sweaty biceps, three-bets to 460,000. Benjamin Pollak looks at his cards. He wants a piece. The Frenchman four bets to 860,000, Adams folds, and Eibinger asks for a count before calling.

Pollak shows AdJc, and he’s ahead with his Austrian opponent holding 8c6c. But then the flop falls onto the felt like a flame in Pollak’s eye.

Eibinger rivers a second pair, and Pollak is out of the €100,000 Super High Roller at the PokerStars European Poker Tour Barcelona.

I don’t think Pollak walked back to his hotel room feeling sorry for himself.

The Rise of Ben Pollak

Pollak has always been a pain in the arse for the best in the business. And then, last year, it happened. Pollak binked one; a big one; finishing third in the World Series of Poker (WSOP) Main Event for $3,500,000.

What did Pollak do with all of that money?

He gave a chunk to Raising for Effective Giving (REG).

The taxman had a piece.

Friends and peers took their bits and pieces.

He invested the rest.

Not in a home.

The €50,000 Single-Day High Roller attracted the attention of 69 entrants, 15 of whom re-entered, to create a €3,347,190 prize pool. The piggy bank only held enough money to pay nine players, and it was Pollak who burst the bubble, much to the relief of those remaining.

Linus Loeliger moved all-in for 212,000 in the cutoff, Stanley Choi did likewise for 240,000 on the button, and Pollak looked down to see pocket aces in the big blind.

Loeliger turned over KQss, Choi showed AKo, and five community cards later, both of them were out, and we had an unofficial final table with everyone in the money.

The state of affairs.

The first person to leave was the man who commanded most of the final table action in the €100,000 Super High Roller, Matthias Eibinger. The Austrian got it in holding deuces and got called in two spots, with Pollak holding sevens, and Seth Davies picking up the rockets. The best hand held up; Eibinger was out.

Jan-Eric Schwippert was the next person to hail a cab. The German got it in on a flop of 8c6h5c holding Tc4c out of the big blind, and Ryan Riess holding pocket queens. The queens held.

Then we lost Jack Salter.

The pro from the UK moved all-in holding AK, and Alex Foxen woke up with aces.

Another hand, and another pair of aces for Foxen. The money went in on a Kd9d8h flop, with Seth Davies holding Ks7c from the big blind, and the turn and river dropped onto the felt in Foxen’s favour. Davies was out in sixth place.

Vaskaboinikau’s hopes of mirroring his countryman Mikita Badziakouski’s winning performance in the €100,000 came to a halt in fifth place. The Belarusian got it in holding AK and lost a big flip against Pollak’s pocket queens. The man with the long name picked up €267,800 for his efforts. Not bad. Vaskaboinikau won a €5,200 satellite to compete in this event.

Next to go was the former World Champion.

Riess moved all-in holding pocket sevens. Thorel called with pocket threes, and a third trey on the turn saw all of the American’s chips migrate to the Frenchman’s part of the table.

Then Pollak took care of Foxen to create an all-French heads-up contest.

Foxen moved all-in holding KQ, Pollak called with the superior AQ, and the lowest board in the world made sure there would be no stars or stripes on the ribbons affixed to this title.

Pollak took control almost immediately, moving into a 6:1 chip lead after a series of impressive hands. Then, down to just seven big blinds, Thorel moved all-in holding A3o, Pollak called with A9o, and a flop, turn and river later it was all over.

The result was Pollak’s second most significant of his career, outside of that November Nine experience. He has now won nine career titles and is second in the All-Time Live Tournament Money Earned list in France with $11,023,546.