Before the WSOP Main Event’s long wait came to an end yesterday and the final table began four months after the rest of the tournament had been played out, Ryan Riess predicted that he would win the tournament. He didn’t do this in passing and try to take it back – he said any time he was asked that he was going to win poker’s world championship when it returned from its marketing-imposed hiatus. In a sense it was bold talk coming from a guy sitting fifth in chips, but with deep stacks in play anything could happen. So much of poker is about confidence; Riess was brimming with it, and it fueled his final push to his first WSOP bracelet.

As play resumed in the Penn And Teller Theater on the final table’s 172nd hand, the blinds and antes were at 500K/1M/150K and the two remaining players were stacked like so:

With both players stacked so deep, the difference of 20 big blinds wasn’t particularly meaningful. Within a few hands Riess had closed it to just three big blinds, and even though he slipped back momentarily he tied things up by Hand #178. As the two played small-ball Farber alternated between pulling into a small lead of about 10M chips and falling back into a tie. 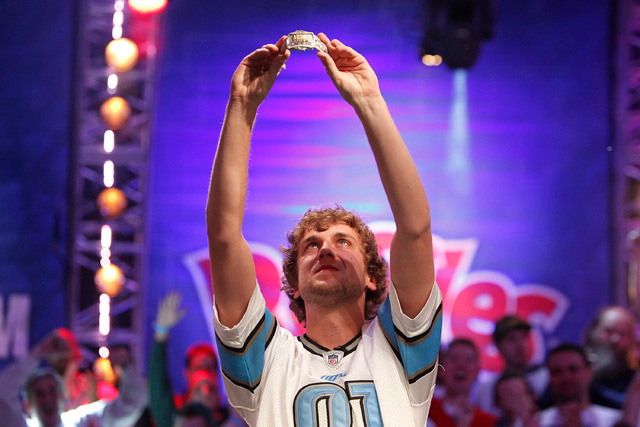 Riess finally took his first turn as the chip leader on Hand #191. He three-bet to 5M out of position before the A-8-4 rainbow flop, then led out for another 5M. Jay Farber made the call, and after Riess checked the 7 of diamonds on the turn he bet 8.2M. Riess eventually called and the river brought the ace of spades; Riess’s bet of 15M was good enough to scare Farber off and drag the 36.7M-chip pot. The 33-big-blind lead didn’t last long, though; just four hands later Farber jumped back in front. He flat-called a pre-flop raise to 2.5M from the big blind and check-called a 3M bet on the 3-3-7 flop from Riess. The deuce of clubs saw Farber check again, but this time he responded to Riess’ 5M-chip bet with a check-raise to 13.55M. Riess thought hard before calling, and he went into the tank again when Farber bet 24.5M after the nine of spades hit the river. Riess cut out the chips for a call but eventually found a fold, and Farber let the younger player know he’d just been bluffed with nothing.

That surely felt great in the moment, but it might have been a mistake on Farber’s part to let Riess know what his bluffs look like. The younger player dominated the proceedings from there, taking seemingly every pot at time and chipping away at Farber’s stack. By the time Farber made his dramatic double on Hand #229 after moving all-in on an eight-outer against Riess’ top pair and hitting his straight on the turn, he’d been whittled down so far that he only chipped up to 36.9M and still faced a 77-big-blind deficit. It was something to work with, though, and Farber put all those chips to use and won six of the next seven hands. That run included a near-double to 65.4M on Hand #234 after rivering a flush and betting enough to goad Riess into making a hero call with queen-high.

Farber was soon back to within 50M chips on the 600K/1.2M blind level, far from an insurmountable deficit, but as it turned out that was as close as he would get. He was unable to hit any strong hands, and Ryan Riess’ reads gave him the confidence to bet and force Farber out of the pot whenever he appeared weak. And even when Farber was able to flop a pair, Riess seemed to hit something stronger on the turn. “Riess has had a hand every deal,” tweeted two-time Main Event champ Doyle Brunson. “Poor Farber hasn’t had a chance.”

Riess was three-betting, four-betting, and check-raising with abandon, and even when he had no cards his plays were all correct. Meanwhile Farber’s stack dipped back below 50M, 40M, 30M, and 20M. The frustration was clear on Farber’s face and when he decided to three-bet all-in for 14M on Hand #261 with Q-5 of spades, the 70th of heads-up play, the result was one anyone could have predicted. Riess snap-called with A-K and picked up an inside straight draw on the J-T-4 flop, taking away the queens that Farber otherwise would have had for outs. That left only the hope of running straight cards or a five, but the trey of clubs on the turn meant only a five would do. The four of diamonds came down instead, and the 2013 WSOP Main Event finally drew to a close.

It was entertaining television all the way, broadcast quasi-live on ESPN to a national audience, and both players should be proud of their play at the final table. For his part, Farber won $5,174,357 – pretty good for his first career WSOP cash. There’s no doubt he’ll be out partying hard in Vegas tonight, celebrating a strong performance and a finish nobody expected from him. Riess, meanwhile, wins $8,361,570 and his first WSOP bracelet. He also becomes poker’s world champion at a unique time for his home country, which is seeing the return of online poker for the first time since Black Friday. That will bring with it all sorts of possibilities – but now isn’t the time to consider any of them. Right now it’s time for Ryan Riess to celebrate the biggest accomplishment in his 23 years on this planet, and for the poker world to finally breathe a sigh of relief and put this year’s extra-long WSOP into the history books.