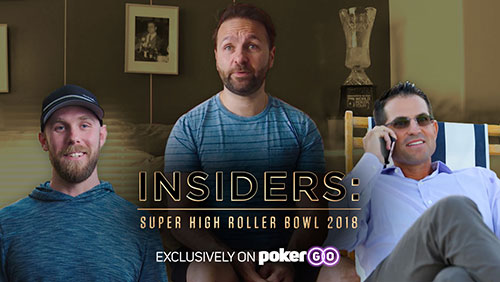 Poker Central and CakeWorks have joined forces to give PokerGO subscribers a fly on the wall view of Daniel Negreanu, Brandon Adams and Seth Davies’ preparations for the 2018 Super High Roller Bowl.


Two years ago, Las Vegas cash game pro, Matt Berkey, rounded up $300,000 in cash and took a shot at the Super High Roller Bowl (SHRB). The man sucked a lot of air into those gritty guts during those four days. It was worth every gulp. Berkey finished fifth for $1.1m, and fortunately for poker fans, Poker Central cameras were on hand to capture Berkey’s preparation.

Can they do it again?

Emmy award winner, Jesse Cook, is the man bringing you the insights. Whether it’s Negreanu chilling on his chaise longue watching SHRB repeats, Adams running through push-fold charts like an astrophysicist or Davies getting throwing lefts and rights – you will see three of the best preparing for the Super Bowl of high stakes poker.

A Point on the Scheduling


The fourth iteration of the SHRB begins May 27, and ends May 30. PokerGO plans to release a free INSIDERS taster on the Poker Central YouTube channel, for a limited time, before the curtain comes up on May 10th for the PokerGO debut.

According to the press release, INSIDERS is a seven-part series, and the plan is to release the content either side of the event itself. I think this is a mistake.

The idea in principle is a brilliantly expensive way of promoting the SHRB to prospective PokerGO subscribers as well as providing current subscribers with a swathe of value, but what value is there of continuing to watch these three prepare for an event that would have ended?

I hope the press release is incorrect, and the show ends before the SHRB begins on May 27.

It’s also interesting that Poker Central is choosing to show the first episode for free (albeit for a limited time) on the Poker Central YouTube Channel. Several

The freebie strategy could mean the PokerGO team are feeling the pinch and need more subscribers, or maybe they’re just a top-notch company providing a pleasant surprise for their loyal followers with the shiny lure of a subscription sitting at the end of the freebie rod.

The $300,000 buy-in SHRB begins May 27 at the newly created esports studio in the ARIA, Las Vegas. You can watch all of the action on the paid for subscription channel PokerGO.

At the time of writing, we know the names of 45 of the 48 entrants who will compete for $14m in prize money, and the first prize of $5m.

Here are the previous winners:

Here is an INSIDERS trailer: