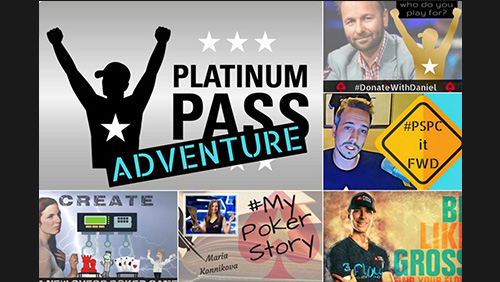 When the concept for PokerStars’ Platinum Pass Adventure first rolled out in May, I wasn’t a fan.

In January, PokerStars will attempt to break new ground when they send 300+ museum curators, gravediggers, and hotel room cleaners to the Atlantis Resort in the Bahamas for a once in a lifetime experience.

The $25,000 buy-in Players’ No-Limit Hold’em Championship (PSPC) isn’t a bucket list thing. It’s an Olympic swimming pool-sized thing. And PokerStars Team Ambassadors continue to give their communities an opportunity to win a Platinum Pass for the event valued at $30,000.

When I covered the promotion, I was a tad critical, believing some of the ambassadors had moved too far away from the epicentre of the game of poker. I was wearing my ‘rational’ head. This morning, I donned my ‘feeling’ head, and I see things differently.

In #DonateWithDaniel Kid Poker wants you to explain in a video no longer than 2 minutes 20 seconds WHO you will be playing for if he was to reward you with a Platinum Pass.

The WHO could be a charity, a cause or a foundation.

And as I watched the video, my heart began beating that little bit faster. I felt like I was about to put all of my chips in the middle hoping my top pair would hold up against the flush draw.

I began thinking about entering the contest.

I thought about sitting in THAT game.

I saw millions of dollars in my bank account.

I thought about the many lives that I could change.

That’s why I understand this now. You can’t read about this challenge; you have to feel it. And this is why the tribal association works so well because each ambassador has catered their challenge for their audience (not prissy media types like me), meaning the chemicals my limbic brain are currently splashing around my body, are also being interspersed through cells throughout the tribes belonging to Negreanu, Veldhuis and co.

The deadline for the #DonateWithDaniel challenge is Sep 30.

Negreanu will announce the winner from a short list of five on his VLOG, October 13. The four losers will receive $1,000 each for their cause. The winner will go forward to the Bahamas, and 50% of any money won will also go towards their cause.

Here are the other challenges.

Shahade is PokerStars mind sports ambassador, and she wants you to create a poker/chess hybrid game and submit it to a panel of experts who convene on October 14 to pick a winner.

“Poker is not just a game, but a passion, a science and a community, just like my first love, chess,” said Jennifer Shahade.

The panel will be looking for creativity and ingenuity, playability and presentation of the game, and a demonstration that you have the passion and experience for chess and poker in your submission.

The submissions need to be in by Sep 30.

The New York Times bestselling author, Maria Konnikova, wants to give a Platinum Pass to the greatest storyteller. Write or record a video for Konnikova expressing a personal story that demonstrates a core principle of what it means to be a good poker player.

“I truly believe that creativity and storytelling ability are among the most valuable and most often overlooked skills in poker – and I can’t wait to see you embrace those skills in this challenge. I’m so excited to announce my Platinum Pass challenge: a call to tell me your stories, in your own voices,” said Maria Konnikova.

Keep your written stories below 250 words, and your videos have to be shorter than a minute. Submissions must be in by Oct 1, and the panel of Matt Salsberg, Melanie Weisner, Helen Ellis and Jen Shahade will rate them on originality, story flow and cohesion, observable relevance to poker, clarity and overall artistry.

Jeff Gross is teaming up with the award-winning Vlogger Andrew Neeme in a bid to award a Platinum Pass to the newest up and coming poker vlogger.

Participants need to submit five videos, each between 5-10 minutes in length.

Here are the details.

• Week 1 (starting 27th August): Tell us who you are and what poker means to you

• Week 2 (starting 3rd September): Film a home game or do a hand analysis

• Week 3 (starting 10th September): Interview a person who has accompanied you on your poker/life journey

• Week 5 (starting 24th September): Tell us why you should come to the Bahamas to play the PSPC

Gross and Neeme will announce a shortlist on Oct 7, and the winner Oct 10.

Whenever I sit down to talk to Lex Veldhuis about his little Twitch family, he always chokes up. You can tell that he feels like part of a family, and there is always a beautiful story to tell of generosity and gratitude coming from his tribe.

Veldhuis wants one of them to do something, anything, for the benefit of others. The submission can be video-based or written, and the deadline is 30 Sep.

“When thinking about this challenge I really wanted to encompass what makes Twitch special for me. Then it became very simple. It’s people anonymously doing stuff for others. Going out of their way to do something nice or be there for someone. It’s a win-win contest as those who do not win a Pass will still feel like they have won by doing something they cherish, and people will have received something nice because of them,” said Lex Veldhuis.

A panel of judges that include Daniel Negreanu, Fatima de Melo, Liv Boeree, Victor Goossens, founder and CEO of e-sports powerhouse Team Liquid, and Ron Vlaar, Dutch international football legend will select the winner based on originality, time spent efficiently doing the most in 20 hours, and what strikes home the most for the judges.

The PokerStars Player’s No-Limit Hold’em Championship is a $25,000 buy-in event that takes place at the Atlantis Resort in the Bahamas Jan 6 – 10. PokerStars is contributing $9m to the prize pool, including $8m in Platinum Passes and an additional $1m to the winner.