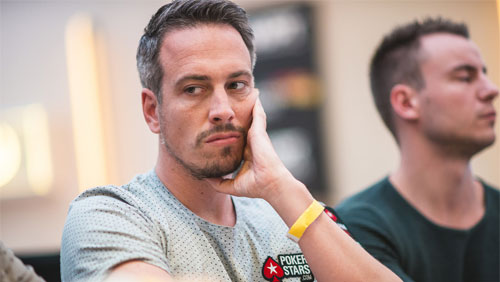 Lee Davy bumps into PokerStars Team Pro, Lex Veldhuis, at the Triton Poker Series in Jeju, and the pair has a chinwag over the ins and outs of commentary, including a few views on Phil Hellmuth’s commentary style.

The last time I look at the clock, it was 6 am. Everything in my room is designed to keep me awake, from the Terminator style red-eye on the TV set to the photograph of the theme park perma-running on my bedside phone to the light that goes on automatically when I take a piss.

Do you have any idea how many times we go to the toilet?

I’m in Jeju, working at the Triton Poker Series, and the lack of sleep is a combination of jet lag and anxiety. It shouldn’t matter that I am interviewing the best players in the world. They are flesh and blood after all. But my cells are continually reminding me that it does.

I receive a text from Lex Veldhuis, who is teaming up with Randy Lew to provide the commentary. He’s prepared to do an interview. Relief. I love Lex, it’s always a pleasure talking to him, and it’s also a relief to cross a name off my hit list.

When he turns up, I’m half asleep. Veldhuis looks as dashing as a man named Lex Veldhuis should. What a fucking cool name. He could be a Marvel character.

He should be suffering from jetlag, but if he does, he doesn’t show it. His slightly greying hair is slick, his eyes look a startling orange, almost like a Gruffalo.

Well, I guess you don’t have kids.

Veldhuis has a meeting with Lew starting shortly, and I need to find another victim, so we get straight into it.

I decide the topic of conversation should be commentating. After all, that’s what the man is here to do, and that’s where the Lex Veldhuis personal brand is currently heading.

“Yeah it’s going to be exciting,” says a pumped up Veldhuis when I ask him about the next ten days. “I will commentate alongside Randy Lew. It’s the first time I have commentating on Short-Deck. The buy-ins are crazy. Today, we have a $12.5k warm-up event; a little feeler for people who want to try Short-Deck.”

When I first began working as a live reporter, I used to feel envious of the players. There existed an uncomfortable and intangible hierarchy, entirely fabricated by myself. I always had the itch to play. I ask Veldhuis how he balances the vibe?

“I always have the itch,” says Veldhuis. “However, it’s important to focus on one thing you’re doing in life, and making sure that everything you put effort towards supports that thing. For me, it’s broadcasting on Twitch and commentating ties in nicely with that. It could be a new career. I learn new skills as a broadcaster because it’s different. You are commenting on content others create; you have a producer in your ear giving you instructions – it’s different.”

I fell into poker writing by accident. My goal was to become a professional poker player, but from a financial and a capability perspective, it began to make more sense to stick with the steadier lifestyle of the writer.

It’s a more consistent way to pay the bills.

I ask Veldhuis if broadcasting provides more security, or is it a love story?

“It’s both,” says Veldhuis. “I’ve always loved Twitch, that’s where the broadcasting passion comes from. It allows me to combine my passion for gaming and poker. For me, it’s the full circle effect. I am telling other people how great poker is. The steadiness is nice. It’s easier to track my progress. It’s more difficult with poker. With my broadcasting career, I am putting another stone in the wall building my platform. However, even while broadcasting, I still have aspirations to play $10k buy-ins etc., so who knows.”

During a recent trip to Barcelona for an 888Live event, I got the opportunity to speak to Parker “Tonkaaaa” Talbot, and asked for his viewpoint on reading books, hiring a coach and taking training courses to improve as a broadcaster. It wasn’t something he felt would be on top of the priority list. I ask Veldhuis for his thoughts?

“You have to understand specific platforms, particularly Twitch. If someone comes onto your platform and makes a joke about Dr Disrespect or another big streamer, and you don’t get it, then you can become disconnected from the platform.

“So I would suggest hanging out on other people’s platforms and learning. You are your own audience, so you have to spend time learning from others. All of those things you talked about would make you a better quality broadcaster especially if you have speaking issues, and your brain is all over the place. In the end, on a platform with so much contact with people, it’s important to be you so people can like who you are.”

Veldhuis is about to commentate on the moves of some of the greatest players in the game. In the wake of Phil Hellmuth’s bashing on social media for his critique of Justin Bonomo’s play during the One Drop, I ask the Dutchman for his thoughts on the issue.

“It’s important to note that Phil Hellmuth legitimately believes he is the best in the world. Coming from a place of vulnerability is essential. Justin Bonomo has been around 14-15 years; he knows what he is doing, and is a super intelligent guy. Even if you disagree with something he does, come at it from a place of neutrality. Because he came up with it, so there has to be a reason. Think about why the strategy may be sound?

“You have to be realistic. If I am commentating on a million dollar buy-in and I am saying he should be doing this and that then I should be in there. I think it’s important to accept your place, respect the people and translate that respect to the audience. It doesn’t mean you can’t ask a critical question, but think about explaining it from the point of view of entertainment.”

I ask Veldhuis if he believes commentators should critique plays on live streams?

“There is a fine balance you have to hit and sometimes you will be more opinionated than other times. If someone is playing way too tight and is being pummeled in situations where he shouldn’t, I have enough confidence in my ability to say that he should be playing more aggressively, but always with the undertone that it’s easy to say because you’re commentating and not out there fighting.”

Just because you play in a million dollar cash game doesn’t mean you’re the best in the world. So sometimes, there may be no skill difference between the commentator and the player in question. I ask Veldhuis about this.

“The commentator may think he could be in the game doing well, but the audience isn’t aware of that. There may be a disconnect. That could create a backlash from the audience thinking, ‘what is he talking about?’ If you have awareness, you could use a different tone, then all sorts of respect come with that.”

Veldhuis’ comments make me think about the audience/commentator dynamic. While a Phil Galfond may complain about Hellmuth’s critique of Bonomo’s play, and others questioning his credentials to be in the booth, don’t the fans want Hellmuth in there. Don’t the fans think that Hellmuth is the best?

“It’s a fair point but, I think Hellmuth is a specific case, so it’s hard to talk on a general perspective. He is so over the top confident, mistakingly so I think. He can say anything he wants if he puts his money where his mouth is. The problem with Phil, he is all talk. He talks about playing for two million heads-up, complains that people don’t have 100% of their action, and yet he doesn’t either. He fires all of the shots but doesn’t want to take any of them.”

I ask Veldhuis how much of Hellmuth’s bluster is panto?

“That’s a tough one. When he gets really emotional like during the Poker Masters, there was a huge debate where he said he should have been ranked #1. I truly believe he thought so and that’s the shocking part for me.”

And then you have to couple this with the possibility that this almost delusional way of thinking is partly responsible for him being so successful as it breeds so much positivity.

Hellmuth is a walking, talking, placebo. 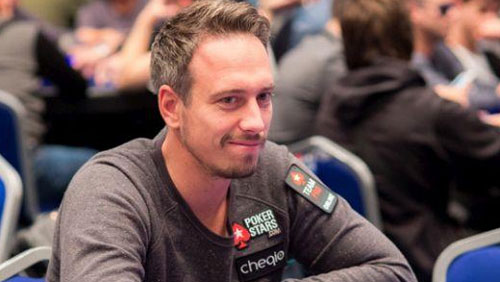 I switch gears, and ask Veldhuis who are his all-time favourite commentators?

“I love watching the WPT and WSOP. The classic voices – Mike Sexton, Vince Van Patten. Anything. I like a classic poker offering. I watched the WPT, WSOP and HSP. I love Joe Stapleton and James Hartigan. I love poker. I think every single poker organisation has done a good job of finding the voice of what they are trying to put on TV.”

Even the WPT with their decision to use Hellmuth as the host of the Raw Deal?

“I would never fault the WSOP for putting him in there,” said Veldhuis. “But they could keep him in check with someone like Daniel {Negreanu} in there with him. He is a respected voice, very open about the serious side of poker, and then you have the Poker Brat. It’s a nice contrast and Negreanu would call him out when needed.”

The man has a pre-commentary meeting with Lew.

I ask him if he would share some of the things the pair will discuss.

“The small things,” says Veldhuis.”Who takes action on the producer’s questions? It’s good to talk, to get a feel. You need to understand when someone finishes a sentence. Otherwise, you talk together. So it’s good just to talk and share thoughts on players and generally smooth everything over. We would be fine without doing it, but it makes sense.”

Finally, I ask Veldhuis how commentary makes him feel?

“It’s great,” says the man. “I would be watching this back home. You get paid to watch poker with your friends. Yesterday, in the hotel room, I watched five hours of Triton coverage, and I was having a blast.”

Yeah, this is not the type of man who suffers from jet lag.