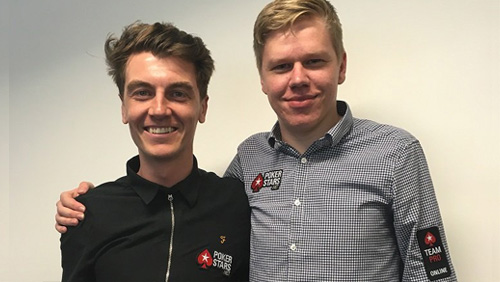 PokerStars has visited the job centre for the second time in a week, with the announcement that Twitch stars Fintan “EasyWithAces” Hand and Benjamin “Spraggy” Spragg have joined Team Online.

“It’s what I have been working towards.” Said Fintan “EasyWithAces” Hand after he was unveiled, alongside Benjamin “Spraggy” Spragg, as the two newest recruits for Team PokerStars Online.

There was a time when most young professional poker players felt like Hand. I imagine most of them still do. The days of logging on and grinding 24-tables in the midst of shitty nappies, empty cans of Red Bull, and a large flat screen showing Buffy the Vampire Slayer are long gone.

Online poker has gotten serious on us.

Working towards something now means creating a Twitch Channel, and creating consistent and compelling content. The grind finally feels like a grind. It’s work, but if you can keep pulling out the roses on Valentines, help to wrap the Christmas presents for Santa, and show up at family gatherings, it’s doable.

Both Hand and Spragg will stream live on the PokerStars Twitch Channel at 13:00 (BST), daily. They join the team a week after Jeff Gross, another prolific Twitch Streamer, joined as a member of PokerStars Team Pro.

Fintan Hand has 18,158 Twitch followers and has won a tad over forty grand playing live, with his claim to fame being a seventh place finish at this year’s Irish Open Main Event dressed in a Shamrock suit.

Spragg, who wants to make poker as fun as it once was when he played in his garage, has 17,821 Twitch followers. He finished fourth in the 2015 Turbo Championship of Online Poker (TCOOP) Main Event on Stars for $159,000 and had a deep run in the Season 8 European Poker Tour (EPT) Main Event in Madrid finishing 19th.

The two newest state troopers jump straight into the action, by participating in the looney bin that is the Micromillions Festival. Punters who can only afford a pet racoon for Christmas can compete in teeny-weeny buy-in events from July 16 – 31.

To hype up interest in the event, PokerStars offered every single player free Spin & Go tickets giving them the opportunity to win seats in Micromillions events, and halved the buy-in for the opening Sunday Storm event to $5.50.

Any player that makes a final table, and the player who finishes at the top of the ITM charts, will compete with Team Pro online members and Twitch streamers in a special $25,000 GTD Freeroll on August 1.