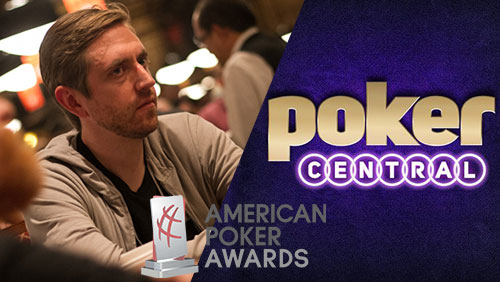 Poker Central and Andrew Neeme are the undoubted stars of the 4th Annual American Poker Awards. Poker Central had a hand in four awards, and Neeme won two.

The 4th Annual American Poker Awards (APA) was the biggest yet, and, some would say, the most controversial.

When the shortlists emerged, three names stood out as potential limelight stealers. Poker Central (nominated for eight awards) and Doug Polk (three). As the profile of the Andaz West Hollywood pulled a shadow over our toes, the name of Daniel Negreanu joined the fray as the two D’s played a game of sticks & stones on their respective platforms.

Both Negreanu and Polk made the shortlist of Poker’s Biggest Influencer and Best Video Blogger. Between them, they command such a chunk of the poker community presence, there became an almost submissive notion that one or the other would win. The sideshow threatened to overshadow the main show.

And then something extraordinary happened.

The evening became a joyless landscape for both, as neither D left the party with anything other than the inside of a balloon.

No Double D? Who Filled The Bra?

As anticipated, Poker Central stole the show. The broadcast king had a fibre optic cable in four awards. The one mired in most controversy (judging by social media banter) was the decision to anoint Poker Central creator Cary Katz as Poker’s Biggest Influencer (in place of either Polk or Negreanu).

The Poker Central Podcast picked up an award (Remko Rinkema now has a European and American Poker Award), Nick Schulman took the prize for Broadcaster of the Year for his work on PokerGO and Dead Money: a Super High Roller Bowl story won the Media Content Award.

On an individual basis, the night belonged to Andrew Neeme. The live cash game grinder turned video blogger, beat both Negreanu and Polk to win the Best Video Blogger Award, and received over 10,000 votes in the People’s Choice Award for Poker Personality of the Year.

The World Poker Tour (WPT) featured prominently. Lynn Gilmartin did a splendid job of hosting (replacing Kara Scott). Matt Savage won his third award on the trot after taking the Industry Person of the Year award, Ema Zajmovic won the Moment of the Year award for becoming the first female to win a WPT title, and WPTDeepStacks won the Mid-Major Live Circuit award. Savage and Rinkema weren’t the only multiple event winners. Lance Bradley picked up the Best Journalist award for the second successive year.

It’s also worth noting that the partypoker MILLIONS North America beat the WPT and World Series of Poker (WSOP) to the Best Event Award giving the growing brand a serious hat tip of recognition in their bid to become the #1 live poker destination.

Here are the winners in full:

Check out the awards show here.