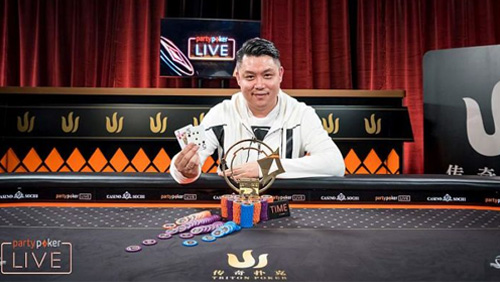 Ivan Leow made it to the final table of the Triton Poker $50,000 High Roller (HR) tournament in Sochi but fell before reaching the money. He didn’t let the defeat get him down and slid over to the $100,000 Super High Roller (SHR) tournament, emerging triumphant.

Leow, who hails from Malaysia, overcame several big names, including Paul Phua, who finished fifth in the HR tournament, Phil Ivey and Manig Loeser. As the final table was set for the HR tournament, Leow was the chip leader—a fact that didn’t help him survive the game. This time, he held the chip lead as he met his heads-up opponent, Germany’s Abraham Passet, and he made sure to capitalize on it.

In the final hand, Passet flopped two pairs. After the turn, Passet decided to shove and Leow, with pocket Aces and a straight draw, responded. When the river card was turned over, a 10 rewarded Leow with two pair to take down his opponent and win $1.134 million. Passet was given a consolation prize of $740,880.

This was the fifth time that Leow has won a prize of $1 million or more at the Triton Poker Series, a tournament that has received a lot of attention among the world’s elite poker players. Besides Leow, high-stakes players such as Ivey, Tom Dwan and Patrik Antonius are routinely seen at Triton events because they feel that the overall environment of the games is better.

The Triton series has also seen an increase in players coming from countries such as South Korea, China and the Philippines. Part of the attraction is the current restricted online poker market in the United States. This has resulted in a number of operators seeking out fresh ground elsewhere, giving rise to a number of regular tournaments outside of the U.S.

India, often touted as the region that should experience a significant amount of growth, is currently embroiled in an internal battle over the legitimacy of poker. Because of this, other areas around Asia have become much more popular, as they have regulations that are more relaxed and inviting for the poker industry. Triton has been particularly successful and is now seen as the go-to for poker players around the region.