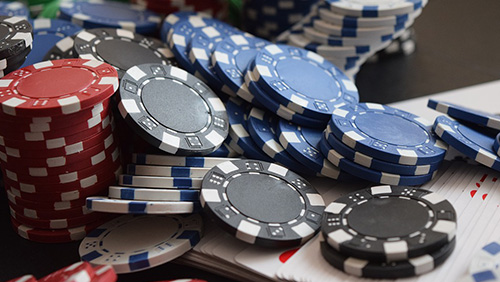 Lee Davy catches up with Bryn Kenney during the Triton Poker Super High Roller Series at Montenegro to talk about his win in Montenegro, his pursuit of the All-Time Money list and more.

Bryn Kenney’s not the guy you’re going to catch during the break for a quick chat about life. It’s smoke and chill time. Unlike the trains that are down the road in Podgorica Rail Station, Kenney doesn’t have to start on time. So, with ten minutes to go before the HK$1,000,000 buy-in Triton Poker Super High Roller Series Main Event in Montenegro, I grab the opportunity to speak to the most recent Triton champion like a hungry kid snatching raspberries off a bush.

We take a pew on the veranda of the Maestral Resort and Casino. It’s too cold for the short sleeve shirt I wear. Some nutter is swimming in the cold Adriatic Coast. Kenney sits next to me, also in short sleeves, but he one-ups me with shorts and sandals.

“The sun is shining on me,” Kenney tells me when I complain about the temperature.

I ask Kenney how he rates his performance.

“I think I played exceptionally well,” says Kenney. “I made a lot of really thin values bets and ran a lot of great bluffs. If I dissected every hand in the tournament, I maybe made one loose river call, but everything else was dead on point.”

It was Kenney’s fifth Triton final table, and the third time he has played heads-up for the win, losing the previous two, including Triton’s most recent stop in Jeju. Kenney picked up $3m for that runner-up finish versus Timothy Adams, but as someone who was there, Kenney desperately wanted that title.

“It was a big disappointment not to get the title,” said Kenney, “but I played well at that final table. Timothy had to win an all in coin flip with three left. Otherwise, I would have had 90% of the chips in play. Going into heads-up, I played ferocious and aggressive and made the right decisions. It’s a letdown because I wanted to win. But if you’re happy with how you played there’s nothing to be unhappy about, so I got over that pretty quickly.”

Kenney’s most recent haul catapults him to the top of the 2019 Money List with more than $6m, overtaking the PokerStars Player’s No-Limit Hold ’em Championship (PSPC) winner, Ramón Colillas. It’s a list that Kenney topped in 2017, and I know that one of his goals is to one day top the All-Time Money List. At this rate, and with the £1m buy-in Main Event coming up at Triton London, suddenly he’s in with a shot.

“I am within striking distance.” Says Kenney.

It’s incredible how quickly things have transformed in the high roller scene where we have one of the stars calling a $12m gap within ‘striking distance,’ but that’s where we are today.

“I could make it if I win in London,” says Kenney. “It depends how much Justin {Bonomo} plays. If he keeps chilling and takes a break while number one; he won’t be holding onto it for too long.”

Kenney’s not the type of guy who ‘takes a break’, but then he didn’t play between Jeju and Monte Carlo telling me that the month and a half break is the longest that he’s had in 15-years.

“If you want to be the best in this game you have to put in the blood, sweat and tears,” says Kenney. “Success; despair – to be the warrior that I am, you have to experience these emotions.”

As the face of GGPoker, Kenney has responsibilities these days. It’s been a year since he surprised the poker world with the appointment, and I ask him how he’s finding the ambassadorial life?

“It’s been going well,” says Kenney. “My name and face are maybe the most trusted in poker because I have been around for 15-years. Nobody has a bad story about me, I have always done the right things, despite being screwed over a lot. I value my word and my relationships more than anything. I have a great idea of what people want in poker, and I like offering them solutions.”

With GGPoker and PokerStars running online series simultaneously with Triton’s live action, I ask Kenney, what his plans are for the rest of the series?

“I am going to play the Main Event, but because of SCOOP and The GG Series, I am going to sit down behind a computer and chill. If there were higher buy-in NLHE events here, I would stay. Throw in a $250k, and I am there, for sure, but a $100k is a standard buy-in now.

“To be honest, when I play a $25k it feels like I am working. I don’t have the same desire or hunger. These days we have $50ks, $100ks, $1m buy-ins. I don’t want to play every day anymore. I am at my best when I play when I want to play; that’s how I can continue to put on my best performances.”

Kenney’s win in the Six-Max was his third of the year, after winning the Aussie Millions Main Event and a $25,000 buy-in at the US Poker Open.

As he said, the sun is shining on him.