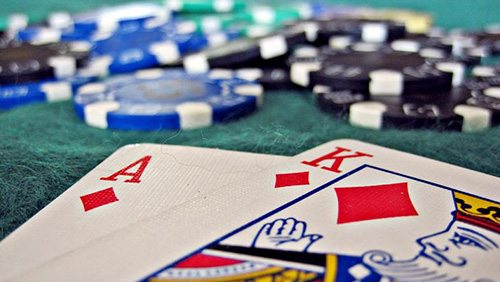 Mikita Badziakouski wins his third title, and overtakes Jason Koon at the top of the Triton All-Time Money List, after conquering a 52-entrant HK$750,000 (US$96,000) Short-Deck event in Montenegro.

The win was Badziakouski’s eighth of his career, his sixth seven-figure score, and combined that makes $24,440,643 in live tournament earnings – not bad from someone who only started racking up live tournament scores in 2010.

Seventeen players made it through to Day 2 with Badziakouski settled in the lower half of the chip counts. Six players would receive a paycheck with ‘Triton’ stamped on the reverse side, and those who have that check have Devan Tang to thank after the former Triton champ lost JJ v AA when all-in pre-flop against cash game genius Andrew Robl.

Xuan Tan out in 6th

Paul Phua began Day 2 with the teeniest-tiniest stack in the room, but after eking into the money, Phua had a shot at the title after tripling up in a hand that saw Xuan Tan lose his footing, and Robl picking up a wound that would prove fatal a few hands later. The three-way pile-up saw Phua get it in good with AcKc against Robl’s AsJs and Tan’s JcTd, and the best hand held.

Andrew Robl out in 5th

Tan’s elimination hand left Robl with 22 antes, and he got them in the middle holding KhQh. His hand would face the pocket nines of Badziakouski, and despite flopping a queen, Badziakouski turned a third nine to send Robl home in fifth.

Paul Phua out in 4th

Phua, who was making his 12th ITM finish on the Triton tour, exited next, and once again Badziakouski was the poker policeman. Phua held pocket queens, Badziakouski held As8s and turned an ace.

Wang Qiang out in 3rd

Badziakouski continued popping everyone’s balloon when he took his toothpick to Wang Qiang. The latter was ahead when the pair got it in with AhQs facing QdJh, but a jack on the turn gave Badziakouski’ another scalp, and a 4:1 chip lead for a heads-up battle with Sam Greenwood.

Bryn Kenney sets his sights on the All-Time Money lead after Triton win
Lee Davy
10 May 2019
.