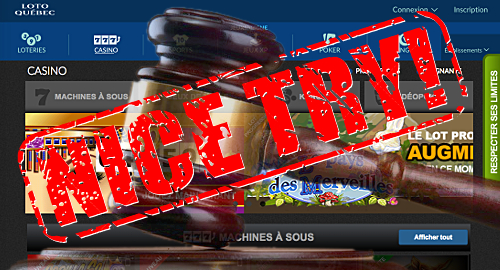 The Canadian province of Quebec has suffered a legal defeat in its plan to block the domains of internationally licensed online gambling operators.

The province had sought to force local internet service providers (ISPs) to block international sites in order to boost the fortunes of Espace-jeux, the online division of the Loto Quebec provincial gambling monopoly.

Quebec’s government had attempted to frame its censorship under the risible guise of protecting the health of the province’s residents. But the court found that Bill 74’s “pith and substance is to prevent online gambling not set up and operated by the province from being ‘communicated’ by ISPs, and not the protection of consumers or their health.”

Apart from the province’s shameless attempt to employ unprecedented levels of censorship for purely financial gain, the court also found that the province had overstepped its authority by attempting to usurp two areas of exclusive federal jurisdiction: telecommunications and criminal law.

Canada’s federal telecom regulator had previously assailed Bill 74 as an unconstitutional intrusion into its areas of authority, while the Quebec court challenge was mounted by the Canadian Wireless Telecommunications Association (CWTA), the trade group representing the nation’s ISPs.

The court ruling emphasized the negative effect that Bill 74, if allowed to stand, would have had on freedom of expression. Under federal law, interfering with digital signals is limited to “the power to modify the signal to eliminate network threats,” and the court found that “there is no proof” that unapproved online gambling sites “threaten the security and integrity of the network.”

Quebec has the option of appealing the ruling, although its likelihood of success appears dubious, given that nobody not affiliated with the Quebec government or Loto Quebec ever thought this effort at rank protectionism would pass legal scrutiny.

It remains to be seen how the ruling will affect Quebec’s plans to offer online licenses to certain international operators, which was widely interpreted as a way of legitimizing the local operations of Amaya Gaming, the previously Montreal-based parent company of PokerStars, which has since rebranded as The Stars Group and moved its HQ to Toronto.