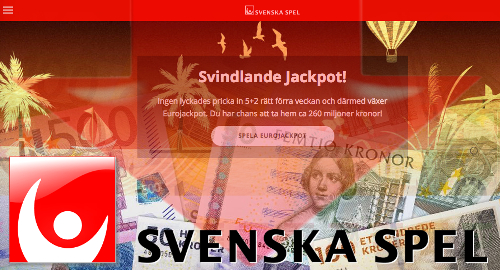 On Thursday, the state-owned Svenska Spel reported revenue of SEK2.08b (US$234m) in the three months ending June 30, a nearly 4% decline from the same period last year. Operating profit was down 11.4% to SEK975m as margins fell two points to 19.1%.

Svenska Spel’s digital division did its best to shoulder the burden with revenue of SEK621m, up one-fifth from Q2 2017 and accounting for 30% of the overall revenue pie. Mobile devices accounted for two-thirds of this digital slice, and mobile growth outpaced the overall digital number, rising 42% year-on-year.

Svenska Spel’s mainstay lottery revenue was flat, while the land-based Casino Cosmopol and Vegas divisions had a rougher ride. The Vegas video lottery terminal business reporting revenue down by one-quarter as more and more customers shift their action online.

Svenska Spel’s poor overall performance stands in stark contrast to local rival Betsson, who today announced a return to profitability thanks to strong World Cup betting action that appears to have passed Svenska Spel by.

Investors might be questioning Svenska Spel’s future because, as of August 1, Sweden will begin accepting online gambling license applications from international operators ahead of the liberalized market’s official reboot on January 1, 2019.

Svenska Spel, which has long chafed at its inability to offer an online casino to match its internationally licensed competitors, has been taking steps to bolster its digital offering. The company has inked an online casino technology deal with Scientific Games’ SG Digital division, and recently announced a live casino tie-up with Evolution Gaming.

Svenska Spel will have a new CEO at the helm when it faces this challenge, as Patrik Hofbauer is taking over from Lennart Käll, who in January announced his intention to step down after seven years.

In a final blog post on Monday, Käll claimed to be “a little jealous” at not being around for this paradigm shift in the company’s history, but not so jealous that he wants to stick around to compete “on equal terms” with the international sites.