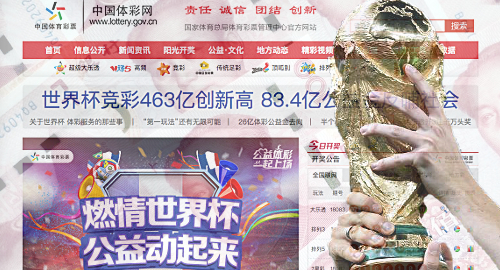 According to the Chinese government’s official sports lottery website, total sales throughout the World Cup hit RMB46.34b (US$6.9b), nearly quadruple the sum generated during the 2014 tournament. The result came in slightly below early estimates of a RMB50b tally, but it’s a staggering achievement, all the same.

The government said that payouts to sports lottery players totaled RMB33.8b, leaving the government with gross revenue of RMB8.34b ($1.24b) from the month-long tournament in Russia, funds that will go toward social welfare programs.

On July 15th, the date of the final match between France and Croatia, sports lottery sales hit a record high of RMB2.74b, while the highest single-day sales total in the 2014 tourney was a comparatively puny RMB874m. Average daily sales over the 2018 event were RMB1.4b, roughly what the sports lottery was earning per week prior to the event kicking off in June.

The 2018 sales total is all the more impressive given that Beijing was still tolerating online lottery sales during the 2014 tournament. The following year, Beijing imposed its infamously enduring ‘temporary’ suspension of online sales after audits revealed provincial lottery administrators weren’t reporting all online sales to the central government.

China took a similarly hard line against unauthorized (i.e. all of them) online gambling operators during the World Cup, and details of these enforcement actions continues to leak out following the tourney’s conclusion.

On Wednesday, the state-run Xinhua media service announced that police in Jiangsu province had disrupted a significantly larger online betting operation a few weeks prior to the World Cup kickoff. The ring, which had reportedly launched in 2016 and catered to punters across 10 Chinese provinces, handled over RMB4.2b ($626m) in wagers, netting its operators a profit of over RMB700m.