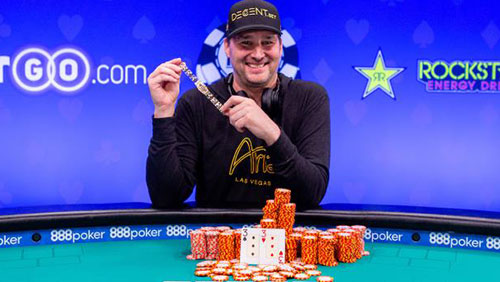 Another round-up from the World Series of Poker this time focusing on a record 15th bracelet win for Phil Hellmuth, as the Poker Brat once again proves that despite his childish tantrums he knows how to win a sliver of gold.

Phil Hellmuth is like a speck of sand in Giza. But if you drink the liquid left for Alice and become small enough to walk through the tiny door that leads to the poker world, the full majesty of Hellmuth comes into view, from a speck of sand to one of the Seven Wonders of the World. And at this rate, when it comes to lay him to rest, Hellmuth will be surrounded by more gold than a Pharoah’s final resting place.

It’s not been the best series for the man who owns the thing.

That’s not enough for a man who has won 14 bracelets.

And then came the outburst at the Main Event.

“It felt like such a low point in my career,” Hellmuth would later tell PokerNews when reflecting on his treatment of James Campbell.

And then an insight into the thinking of the man, and perhaps why he manages to defy all the criticism and keep winning bracelet after bracelet.

“Then I said: the only thing I can do is buy him into the Main Event and that’s gonna make me feel better. So I bought him in, and I went from 400 negative tweets to 600 positive tweets in one day. It’s the swingiest week in my life; from people cheering because I busted too — I think — a lot of people cheering that I won.”

It’s always about him, and while the world will appreciate that behaviour as much as waking up to find a nuclear power plant setting up next to your kid’s school, it works in the poker world.

It’s the ego of the man, but without it, who would he be?

Not a mighty pyramid.

Maybe a grain of sand.

39 were left, including nine bracelet winners with 26 between them inflated by the 14 Hellmuth has dotted around the homes of those he loves the most.

The Belgian Jonathan Abdellatif had the chip lead with 754,000.

The first player who lost his footing on the cliff face of this thing was Gregory Kolo, but there is no news of his exit, in the PokerNews $5k portfolio. The three-time World Poker Tour (WPT) Champion, Anthony Zinno, busted to Chi Zhang AJ>KJ when Zhang rivered a flush. And one of Hellmuth’s former sparring partners, David Kitai busted when his trash lost to the garbage of Farid Jattin.

Boeree was the next big star to leave the tournament when she found a set of fours at the same time Hellmuth found a set of eights. That hand left her with chip dust but plenty of lust, only for Shawn Daniels to bleed her dry QQ>83o.

Steven Wolansky began to look a serious threat when he disposed of Chance Kornuth’s body A2>93o, and A8>QJs in a double hand karate chop combo. Hellmuth sent Grayson Ramage packing in 17th place: JJ>A6. And Hicks sent the dangerous Griffin Benger to the rail in 15th place when his KTo dominated the QTo of the former Nov Niner.

Sternberg took out Ausmus in 12th place when his A3o beat K3o. Glantz eliminated Petar Kalev in 11th, J4>J2. And a final table of nine turned up when Aliaksei Boika killed the tournament hopes of Eric Hicks and Paul Fontan when his KK beat QQ & KJo.

Wolansky decided the short stack wasn’t for him when he eliminated Ralph Wong A9s>55 to move up to 1.6m. Chip leader, Sternberg took out the former bracelet winner, Hoefer, when KK dismantled JTo. And we were down to five when Boika took out Glantz J6>J4 on A64 with Glantz searching for a flush draw that remained as lost as Lord Lucan.

Boika took the chip lead after eliminating Glantz, and the Belarusian extended that lead when he sent Ken Fishman home $100,956 the richer A4>86s. And then the beginning of the end for Boika: Sternberg doubling through the chip leader 99>A9 to send him tumbling into a coffin. And Wolansky nailed it shut KK>AK to send Boika out in fourth.

Hellmuth doubled through Sternberg A5>KK when he flopped an ace and turned a five. And then we reached heads-up when Wolanksy sent Sternberg and his impressive Gimli like beard to the rail when AQ beat J9s.

Hellmuth doubled quickly AK>QT to move within 1.3m of Wolansky. But Wolansky pulled ahead to create a distance of 3.5:1 between the pair. Then the 14-time champion fought back before doubling into the lead KT>KJ when a ten appeared on the river.

Fortunate favours the man who gets there more than anyone else.

A few hands later and it was all over.

The pair got it in with Hellmuth’s pocket treys trying to avoid aces and nines. The nine appeared in the window, but a trey and deuce joined it, and Hellmuth’s rail went into barmy mode.