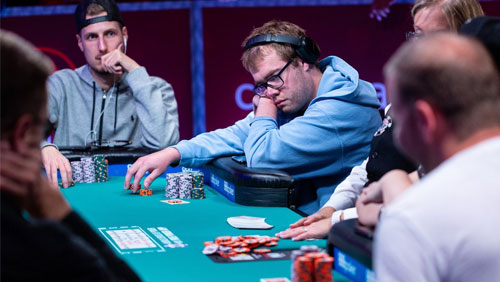 A run through the highlights of Day 5 of the World Series of Poker Main Event after a storm brings the action to an early halt with Michael Dyer leading the final 109 players.

Las Vegas is under siege.

The Poker Gods are skull-fucking the World Series of Poker (WSOP).

Day 5 of the poker tournament guaranteed to give you a severe case of sciatica, came to a premature close after a storm shook the Rio so hard the lights went out.

There was no backup plan.

41,000 people have no power in Sin City. While it may bother the whores and the bores, the 109 players who safely navigated their way through the storm inside the Rio, and the Maelstrom outside, won’t be worried about power.

Then back to battle.

Kelly Minkin made it crystal clear that she would be the only woman advancing to the thicker end of this wedge, sending Mina Greco packing after flopping trip nines with 97cc versus the AQs of Greco.

Tom McDonald, who makes more money playing live cash games in Macau than I make in ten lifetimes, found the lovely spot of being all-in holding the rockets against two players each fondling a pair of ladies.

Magic the Gathering hero, Eric Froehlich eliminated Joshua Jackson AK v JT – with the latter missing all of his draws on a board wetter than the Strip.

Seth Foster eliminated the former November Niner Bruno Politano AT>JJ when an ace appeared on the flop. Politano joined 888Poker after that fantastic run in 2014, and two people who joined the same outfit much later than he also hit the rail, when Pierre Gentil ousted Chris Moorman T9s>ATs on a flop of T93r, and Randall Lack eliminated Arsenii Karmatckii QQ>AK.

Kelly Minkin eliminated Dong Kim QQ>TT to take the chip lead, soaring over 5 million. Bracelet winners Chris Bjorin and Daniel Ospina were left wondering what might have been, as were Anatoly Filatov and Govert Metaal.

We lost the Day 1C Chip Leader, Samuel Touil, and the three-time World Poker Tour (WPT) Champion, Chino Rheem, would not be repeating his seventh-place finish in 2008 after Bryce McVay sent him spinning AQ>99 after a queen planted her sceptre on the flop.

Ognjen Sekularac eliminated Adam Levy A7s>AQo with the money going in on the turn. Roothless had the lead, only for Sekularac to spike the third spade on the river, which he used to bury his American opponent.

Brian Hutter took the chip lead from Minkin, and Randall Lack (AKo) moved into contention with the double knock out of Gregory Perry (KJs) and Pierre Gentil (AJs).

The brilliant Belgian, Bart Lybaert, took the chip lead, and a man who lives not far from that part of the world, Bas De Laat, sent Antonio Esfandiari to the rail, after the Dutchman flopped a set of fours, with the Magician flopping top pair. The money went in on the turn with Esfandiari drawing dead.

Here are the leaders.

11 bracelet winners remain, with 16 between them.

James Akenhead busted, but I still have four horses in the race.

Candles at the ready.