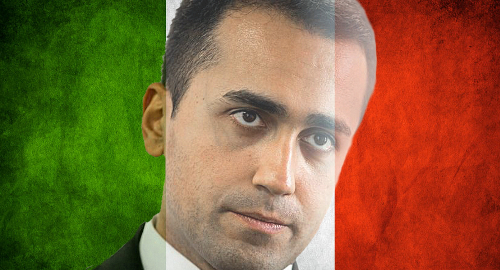 On Monday, Italy’s new coalition government submitted its so-called Dignity Decree to a parliamentary committee for approval. The decree stipulates that “any form” of gambling advertising, “even indirect … is prohibited; however carried out and on any means, including sporting, cultural or artistic events, television or radio broadcasts, daily and periodical press, general publications, billboards and internet.”

As previously revealed, the ban would take effect on January 1, 2019, although the latest draft submitted to the committee includes a carveout for advertising contracts between operators, media outlets and sports bodies “in progress at the date of entry into force of this decree.” National deferred lotteries will also be exempt from the ban.

DI MAIO TELLS LEOVEGAS TO (CIGARETTE) BUTT OUT
Meanwhile, a public war of words has erupted between Italy’s new Minister of Labor and Economic Development Luigi Di Maio (pictured) and Niklas Lindahl, managing director of the Italian division of online gambling operator LeoVegas. Last week, Lindahl wrote a public letter to Di Maio urging him to “revise” the advertising ban to address the issue of problem gambling “without populist slogans and action.”

Di Maio used his personal Facebook page to rebuke Lindahl’s claims of “prohibitionism,” saying the only thing that was being prohibited was the public promotion of gambling, not gambling itself.

Di Maio also rejected Lindahl’s argument that unauthorized online gambling operators would flourish under the proposed restrictions. Di Maio claimed that “the opposite” would occur because the current advertising deluge has “a clear effect on the desire to play, something that causes more to be played also in illegal operators.”

Di Maio supported his views by referencing the film Thank You For Smoking, in which Aaron Eckhart plays a shameless lobbyist for a fictional tobacco firm. Di Maio slammed the film’s depiction of tobacco promotion in convincing “so many people that smoking is attractive, ignoring that it hurts and seriously harms health.”

Di Maio claimed that while gambling did generate “several billions” in tax revenue for the government, “the social costs generated by pathological gambling are at the same level.” Di Maio further declared that “the disease of the game is an obstacle and my job is to eliminate it and we have identified the prohibition of advertising for the game as an instrument. We will not surrender.”

LINDAHL RESPONDS
Lindahl responded to Di Maio’s missive with his own public letter, saying advertising was the “main advantage” offered to Italian-licensed operators and that taking away this advantage had altered “an essential element” of operators’ Italian licenses. Lindahl previously threatened to take Italy to the European Court if the advertising ban was imposed as written.

Lindahl said the problem with gambling advertising stemmed from operators offering “deceptive messages,” and so the government’s emphasis should be on limiting these deceptions rather than throwing out the baby with the bathwater.

Lindahl also noted that the ban on tobacco advertising had been a failure, given Italian National Institute of Statistics data ranking tobacco as the top pathological addiction affecting Italians in 2017. Some 10.3m Italians still smoke regularly, while problem gambling affects less than 1m individuals.

Lindahl closed by offering to meet Di Maio to discuss the situation and hopefully avoid the imposition of strict measures that Lindahl fears would result in major layoffs at Italian licensed gaming operators.