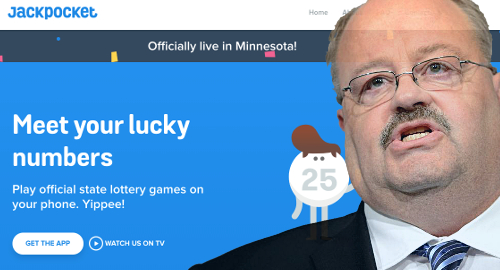 Minnesotans can once again purchase lottery tickets using their smartphones, but it’s anyone’s guess as to how long this latest experiment in modernity will survive.

On Tuesday, the Minnesota Lottery announced that it had entered into a memorandum of understanding with a New York-based company called Jackpocket for a “lottery service business” that, as of Tuesday, allows Minnesotans to order lottery tickets via an iOS app.

Jackpocket is essentially a payment agent that collects numerical lottery ticket orders – no scratch cards – from customers, then purchases tickets from a retail outlet. Customers, who must be physically located in Minnesota at the time they place their order, receive an email receipt at time of order indicating the numbers on their tickets, and later receive digital photos of said tickets as further proof of purchase.

Customers fund their ticket purchases – which are capped at $100 per day, although players have the option of setting that limit lower – by providing Jackpocket with bank account data. Jackpot charges customers a 7% fee of the ticket price, but doesn’t take any cut of player winnings.

Winnings under $600 are paid out via the app and can then be transferred to the customer’s bank account or used to buy more tickets. Jackpot will securely deliver the tickets for winnings over $600. Customers can manually check their lottery results but Jackpocket will alert them via email and push notification if their tickets are winners.

Jackpocket launched in New York in 2015, and its website says the company is also currently operational in New Hampshire, but company CEO Peter Sullivan told the Star Tribune that Minnesota is the first state in which the service has been offered.

HERE WE GO AGAIN
The Minnesota Lottery insists that Jackpocket’s activity is legal under a state statute that permits lottery service businesses that charge a fee or commission to purchase tickets on behalf of customers or subscribers. But some state legislators aren’t buying it.

In 2014, the Minnesota Lottery became the first US state lottery to offer online scratch tickets but was forced to take them offline the following year after state legislators claimed the Lottery had failed to secure their approval for the eScratch product.

Some of the same suspects responsible for the online scratchers demise are voicing similar objections to the Lottery’s latest foray into the digital realm. Rep. Greg Davids (pictured), who co-authored the bill that killed the online scratchers, is convinced that Jackpocket’s app violates state laws requiring tickets to be sold for cash on a licensed retailer’s premises and without additional fees.

You can’t blame the Minnesota Lottery for continuing to push the envelope. The Lottery’s 2017 sales total was $563m, $29m less than the year before. The online scratchers had been credited with not only boosting sales but attracting a younger demographic that views traditional lottery products with disdain.

Leaving Minnesota out of the picture for the moment, Pennsylvania became the sixth state to offer online lottery products earlier this month. Georgia, Kentucky and Michigan offer online games in addition to draw tickets, while Illinois and New Hampshire are ticket-only online states.