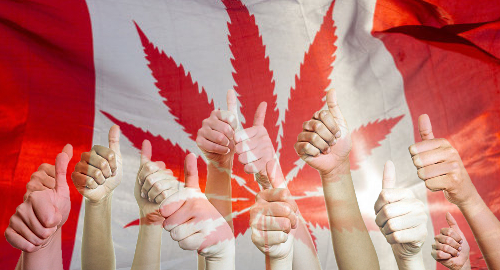 Canada has become the first G7 country – and only the second country on the planet – to legalize recreational marijuana use.

On Tuesday, Canada’s Senate gave Bill C-45 (guess C-420 was taken) its approval, leaving only the granting of Royal Assent before the right to blaze ‘em if you got ‘em becomes enshrined as the law of the land.

Canadians will still have to wait another 8-12 weeks before toking is officially legal, as the individual provincial governments need to ensure that their respective legal pot marketplaces are ready for prime time.

Canadians will soon be able to walk around with up to 30g of pot without fear of interference, although where they’ll be able to partake will be up to the individual provinces to decide. Edible marijuana products won’t get the official okay for another year.

Uruguay is the only other country that currently permits recreational herbal intake, having played Santa Claus to their nation’s bud fans around Christmas 2013, although it took another four years for the product to start appearing at the retail level.

Canada first criminalized marijuana possession way back in 1923 but the reefer madness began to abate in 2001, when the ruling Liberal party approved medicinal marijuana use. It took another 17 years and another Liberal government under Prime Minister Justin Trudeau to shake that prohibitionist impulse for good.

Despite that nearly century-long prohibition, there were notable pockets of resistance. Vancouver earned its ‘Vansterdam’ nickname not only for the ubiquity of internationally award-winning high-quality product but also for the fact that local cops long ago acknowledged the futility in busting pot smokers, who looked quite tame in the presence of a raging heroin crisis.

However long it took, Canada is to be congratulated for having the damn good sense to recognize the preposterous nature of the pot ban, especially given (a) the fact that most Canadians didn’t have a problem with pot, and (b) the outsized share of government revenue that comes from the taxation of alcohol, an infinitely more hazardous (yet equally enjoyable) product.

Canada, at least in terms of its traditionally more conservative neighbor to the south, has taken the lead on a number of socially challenging issues, including, for example, online gambling. Several Canadian provinces launched online gambling operations years before individual US states took the plunge.

Nearly one-fifth of US states have gotten on board with recreational marijuana, although the federal government’s Department of Justice would love to crush those independent streaks under the weight of Attorney General Jeff Sessions’ tiny elf-like heels.

Given the current media fixation on America’s southern border, it’s perhaps worth noting that the original US legal war against marijuana began shortly after the arrival of Mexican refugees fleeing the violent revolution in their home country. The fact that these immigrants preferred pot to hooch as a way to take the edge off apparently made them seem more threatening, sparking calls for some way of smacking them down. But as the current situation amply demonstrates, fear and loathing make for really lousy policies.