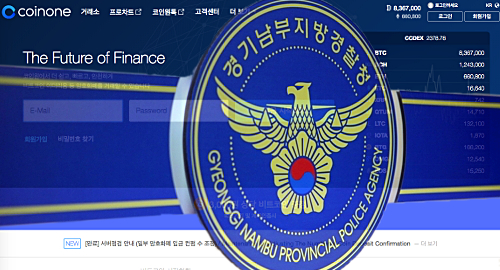 South Korean authorities are recommending illegal gambling charges be filed against the CoinOne cryptocurrency exchange for its margin trading service.

In January, the Gyeonggi Nambu Provincial Police Agency announced that it was conducting an investigation into CoinOne’s margin trading service, which allowed customers to speculate on whether the value of a particular cryptocurrency would rise or fall.

On Thursday, Yonhap News reported that the Gyeonggi Nambu investigators had recommended bringing charges of illegal gambling against three CoinOne execs, including CEO Chae Myung-hoon. The company said it is cooperating with the investigation and would continue to do so should charges be forthcoming.

Charges may also be filed against 20 high-volume users who handled over KRW3b (US$2.8m) in margin trades via CoinOne. Approximately 19k CoinOne users made use of the margin trading product before it was shut down.

CoinOne, which is South Korea’s third-largest crypto platform, launched margin trading in November 2016 and the investigation reportedly began in August 2017. CoinOne shut down the service last December, and market-leading rival Bithumb shut down its own margin trading option around the same time.

The police probe reportedly took 10 months to reach a conclusion due to uncertainties in existing law regarding the relatively new crypto phenomenon. While short-selling is legal on South Korea’s main securities exchange platforms, the police have determined that cryptocurrency platforms aren’t afforded the same leeway.

A CoinOne staffer told Yonhap that the margin trading product had been reviewed by lawyers before being offered to customers. The lawyers reportedly determined the product was legal in part because the site didn’t receive a proportional cut of customers’ successful margin trades.

The police have alleged that CoinOne’s margin trading could allow nefarious types to launder money, an accusation that South Korean authorities have long leveled against international online gambling sites that cater to the country’s gambling-mad residents.

South Korea maintains a tight lid on its citizens’ capacity to gamble, allowing them to access only one of the country’s 17 land-based casinos. The only other legal gaming options are local lotteries and limited sports and race betting services.