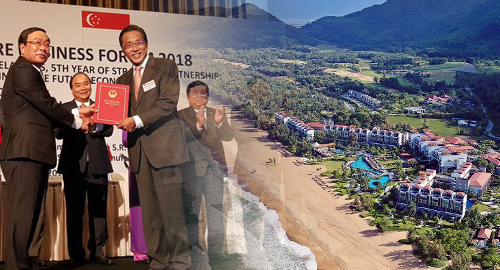 Vietnam’s Laguna Lăng Cô has been awarded a casino license, the first such license the Vietnamese government has issued in a decade.

This week, Laguna Lăng proudly announced that its $2b resort project in Thua Thien Hue province had finally received its casino license. It’s the first such license issued in Vietnam since The Grand Ho Tram Strip, currently the nation’s only large-scale integrated resort with gaming, received its go-ahead.

The Laguna Lăng resort opened its $285m first phase five years ago but Banyan Tree’s Ho said “many hotel investors and development funds have been awaiting the casino license and the selection of a casino operator before finalizing their investment into our Phase 2.”

In addition to new hotels and other amenities, the developers intend to embark on a major infrastructure upgrade, including transportation, electrical systems, water and environmental management systems to ensure the resort can handle the expected influx of tourists.

Given its expected launch date, the Laguna Lăng casino won’t be open in time to participate in Vietnam’s three-year trial of allowing local residents to gamble in casinos. The Ho Tram venue and the country’s smaller gaming halls (mostly in upscale hotels) have traditionally been off-limits to locals but the government announced it would temporarily relax these rules at select casinos to gauge the impact on society.