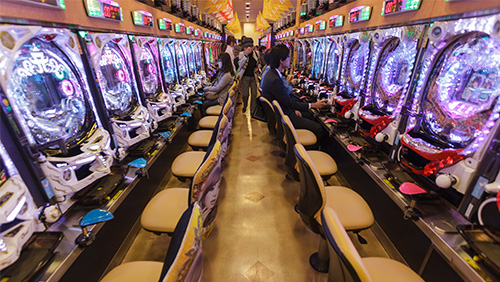 The year has been kind—so far—to Japanese pachinko hall operator Dynam. In an environment that has seen pachinko slide in recent years, Dynam reported revenue gains before taxes of 13.3% in the fiscal year ending March 31, 2018, when compared to the prior year period. Dynam controls about 5% of all the pachinko parlors in the country.

, JapajnDynam operated around 450 pachinko halls through the end of March. In a filing with the Hong Kong Stock Exchange, the company reported that overall revenue in fiscal year 2017 reached $1.37 billion and profits before taxes topped $152.7 million.

Despite a steady decline of pachinko in Japan, Dynam maintains profitability by running its halls at a lower cost than other competitors. In its filing, it said, “By reaping the benefits of the economies of scale through multiple-hall development when purchasing game machines and general prizes, the group has positioned itself in a strong, advantageous position to develop the pachinko hall operation business.”

Part of the strategy includes the standardization of the types of halls and a focus on additional halls only in regional areas with smaller populations. Dynam didn’t detail how it would overcome the rapidly shrinking interest in the once-ruling game in the country.

Since last year, pachinko experienced a decline in popularity. As many as 420 halls closed last year, following a trend seen over the past five or so years. The decline has been driven primarily by an increase in other entertainment options in the country.

In addition to the waning interest on the part of consumers, pachinko has recently come under fire from legislators, as well. One in particular, the Constitutional Democratic Party of Japan’s Takashi Takai, has publicly expressed his disdain of the game, calling it ”morally unfit” and suggesting that it shouldn’t be allowed in casinos when Japan opens the market.

Pachinko once cornered the market in Japan. In 1995, pachinko halls attracted 30 million customers and raked in around $280 billion in revenue. By 2016, the number of customers was cut by two-thirds and revenue was down to around $200 million. While there is, obviously, still profit to be had, pachinko is definitely losing favor with consumers and, in particular, with millennials who, in general, prefer digital games over the “old fashioned” kind.